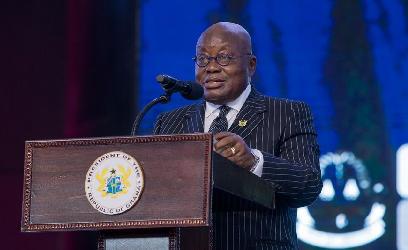 Internal vigilance will be enhanced to prevent anti-democrats from subverting the established system, President Nana Addo Dankwa Akufo-Addo has declared.

“We shall not let our guard down and allow the clammy embrace of the people by anti-democrats, who are disdainful and incapable of effective popular mobilisation through accepted channels but who want shortcuts to power without the express support of the people,” he said.

Delivering the opening address at the 2021 Annual General Conference of the Ghana Bar Association (GBA) in Bolgatanga yesterday, the President said the nation had derived enormous benefits from democracy and it was important that internal vigilance was enhanced to prevent any incursion from persons who had no belief in democratic governance.

“Democracy has been beneficial for the continent and for our country. We know, however, that the price of freedom is eternal vigilance, and vigilant we shall be here in Ghana,” he said.

The five-day conference is on the theme: “Ensuring an increase in revenue mobilisation through taxation for the purpose of accelerated national development: The role of the lawyer”.

For the first time in the history of the GBA, the conference was held both physically and virtually.

While 600 members of the GBA are attending the conference physically, about 700 are participating in the event virtually.

President Akufo-Addo said Ghanaians should be proud that the Fourth Republic had ushered the nation into the longest, uninterrupted period of stable, constitutional democratic governance in the country’s history.

“Under the Fourth Republic, there have been three peaceful transfers of power through the ballot box on three separate occasions.

“The anti-democrats, who are always looking for occasions to sneer at democratic governance, should also bear the data in mind,” he said.

The President traced the role played by members of the GBA in the return to constitutional rule and added that with next year marking 30 years of the outcome of the 1992 Referendum, there was ample demonstration of the commitment of the people to democratic governance.

He observed that the decision by the citizenry to choose the path of democratic governance had ushered the country into “the longest and uninterrupted history of stable constitutional and democratic rule”.

Providing data, President Akufo-Addo said there was no doubt that all aspects of national life had seen significant improvement under democratic dispensations, compared to the periods of military rule.

“The 1970s and 1980s, the periods of unbridled authoritarian rule on the continent, were the eras of economic decline, worsening poverty, collapsing infrastructure and insecurity on our continent. Gross Domestic Product (GDP) per capita in 1970, for example, according to the World Bank, stood at $220.

Education, health and other areas of national life had all seen appreciable growth, he said, and backed his claim with statistics.

Earlier, when he mounted the podium to address the conference, the Attorney-General and Minister of Justice, Mr. Godfred Yeboah Dame, had taken issue with some lawyers who had the tendency to denigrate the Judiciary and undermine public confidence in the system.

“Even when applications duly filed in accordance with law and procedure are pending before the highest court of the land, some legal practitioners do not spare the effort to prejudice the minds of the public with mischievous analysis on public radio, television and social media, all calculated to force the hands of the judge to deliver the verdict in a particular manner or whip up sentiments of the public against the particular court hearing the matter in the event of an outcome not favourable to them.

“These practices are vicious and misguided, to say the least. It holds true that the arena for the lawyer to test the strength of his reasoning or the validity of his argument is in the courtroom, not the airwaves or modern-day social media,” he stated.

Tax system
Mr. Dame said the professional and ethical training of lawyers placed them in a position to play a fundamental role in the proper functioning of the Ghanaian tax system.

“Sad to say, many lawyers are caught in the phenomenon of tax evasion, as they unjustifiably avoid being caught in the tax net, either by understating their profits or concealing their true income.

“The luxurious lifestyles of lawyers in riding in the most plush of vehicles and acquiring top-end properties are hardly commensurate with the amount of taxes they pay,” he said.

The minister said he was continuing with the process of strengthening the systems in place for preventing corruption by ensuring that a set of far-reaching and perhaps a more fit-for-purpose set of regulations for the conduct of public officers was laid down through the enactment of a Conduct of Public Officers Law.

“The proposed Conduct of Public Officers Bill, which has already gone through discussions by various stakeholders at a forum organised over a month ago, will follow the example of legislation in other jurisdictions.

“The bill also seeks to address matters relating to sexual harassment and provides a gamut of stringent administrative measures and sanctions to deal with violations of the law, ranging from a bar against holding public office to penal measures,” he said.

The Chief Justice, Mr. Kwasi Anin Yeboah, called on lawyers to advise their clients to resort to the Alternative Dispute Resolution (ADR) method to resolve disagreements and misunderstanding, as it was less expensive and more rewarding.

He noted that there were minor cases that could easily be resolved through the ADR method and it was imperative for legal practitioners to explain to their clients the more convenient and less stressful options available for them before heading to the law courts.

The President of the GBA, Mr. Anthony Forson Jnr, observed that 7,866 lawyers had been produced in Ghana between 1877 and 2021, out of which 4,882 were practising actively.

He warned social media users not to hide behind their anonymity to “trade unsubstantiated allegations".