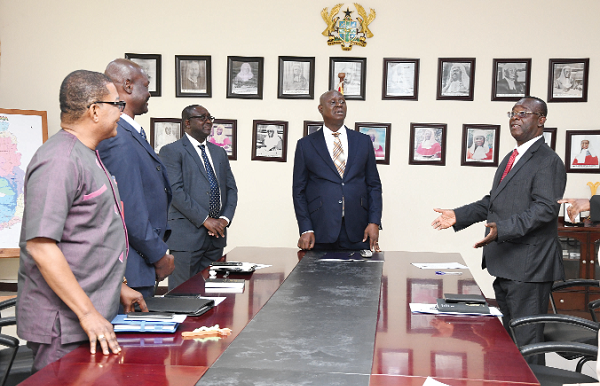 He said the media were being filled with adult content and profanity under the guise of relationship and lifestyle programmes, with some of the content broadcast during prime time when children were yet to sleep.

Such a situation, he said, was against the culture of decency acceptable in the country and could negatively impact the growth and development of children.

“So-called lifestyle and advice programmes operate as thinly disguised avenues for the display of profanity and vulgarity. There are times and places for content of that nature.

“I would urge the NMC to, as a matter of urgency, ensure that content on our airwaves is properly regulated, in deference to our culture and our duty to our children,” he said.

The Chief Justice made the call when he swore into office two new members of the NMC at his office yesterday.

The two new members of the NMC sworn into office were the Editor, Graphic, Vincent Kobina Asmah, and a retired journalist, Gabriel Asante Bosompem.

The Editor, Graphic, known in his professional life as Kobby Asmah, and Mr Bosompem will represent the Ghana Journalists Association (GJA) on the NMC, the constitutional body mandated to register media organisations and promote standards in the media space.

At the swearing-in ceremony at the Judicial Service Headquarters in Accra yesterday, the two new members of the NMC swore the oaths of office and allegiance.

Present at the ceremony were a Justice of the Supreme Court, Justice Paul Baffoe Bonnie; the Judicial Secretary, Justice Cynthia Pamela Addo; the Director of the Ghana School of Law, Yaw Oppong; the Executive Secretary of the NMC, George Sarpong, and the President of the GJA, Albert Kwabena Dwumfour.

The Chief Justice said the media were crucial to the country’s democratic dispensation, noting that it was in furtherance of democracy that the Constitution had insulated the media from direct control by the government.

He urged the NMC to continue to defend media freedom and the freedom of expression, in line with the dictates of the 1992 Constitution.

In doing this, he said, the NMC must ensure that the media reflected the framework of diversity, freedoms, mutual respect and shared responsibility which were frameworks for development.

Mr Asmah, who spoke on behalf of the two new members, said they regarded their appointment to the NMC as a call to serve the nation.

The NMC, he said, was a body that played an important role in the country’s development and, therefore, they would work hard to continue to position the commission as a strong institution that was efficient and media friendly and worked to support journalists to professionally perform their duties.

“We pledge to work to strengthen the pillars of freedom, responsible media and the safety of journalists while endeavouring to deepen good governance, democracy and accountability,” he said.

According to him, one critical area they would focus was the training and retraining of journalists to ensure that journalists continued to build their capacity and improve standards.

For his part, Mr Sarpong lauded the Chief Justice for promoting media freedom and supporting the work of the NMC, adding: “Your commitment to the Constitution, the NMC and media freedom has been resolute.”

Mr Asmah is the Editor, Graphic, supervising all the brands of the Graphic Communications Group Limited (the Daily Graphic, The Mirror, Graphic Business, Graphic Sports, Graphic Showbiz, Junior Graphic, as well as Graphic Online and Graphic Apps) which are all market leaders in the media industry in Ghana.

He has over three decades of experience in journalism and two decades at the newsroom management level.

Mr Asmah won the 2008 GJA Best Journalist in Political and Parliamentary Reporting Award and the GJA Outstanding Editor in 2019.

Mr Bosompem is a retired journalist who worked for over 28 years in the broadcast media.

He is a former Production Manager of TV3.

He also held many managerial positions at TV3, such as Deputy News Editor and Ashanti Regional Manager.