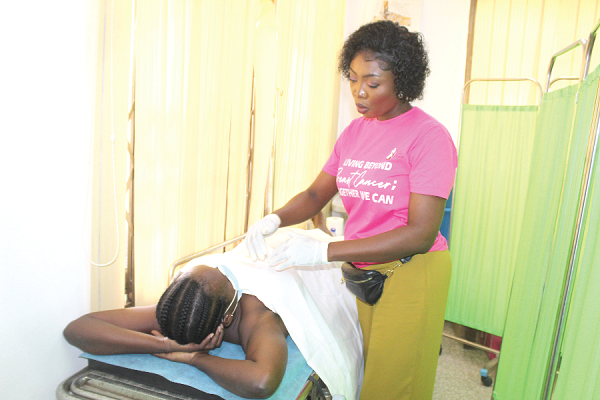 Over 4,400 breast cancer cases were recorded in 2020, out of which 2,055 died from the disease, the Programmes Manager, Non-Communicable Diseases (NCDs) at the Ghana Health Service (GHS), Dr Efua Commeh, has stated.

“We lost almost 50 per cent and this cannot be acceptable by any standard. Even though we are making a lot of noise about breast cancers, we still need to continue to ensure that people know that the disease still exists,” she said.

She said the majority of the deaths could have been avoided if cases were detected early. She attributed the poor outcomes to poor awareness, limited screening sites, limited number of trained health workers to screen and manage cancers.

Dr Commeh made this known to journalists when the GHS celebrated its Breast Cancer Awareness Month in Accra on Monday, October 24, 2022, to screen their staff and the public.

She said although the screening exercise was dedicated to its staff, it was also open to the public (both men and women).

The week-long screening exercise was on the theme: “Early detection saves lives”.


It was organised at the Wellness Clinic at the GHS headquarters.

Similar exercises were being organised at its regional and district offices across the country.

Dr Commeh urged the public to live good lifestyle choices to avoid the risk of getting breast cancer.

“People must eat a healthy diet and engage in actual physical activities as these things tend to promote their general health and well-being.”

“It builds one's immune system so that even if there's some cancer around their body, they can fight it generally,” she said.

She said the GHS was intensifying awareness, as globally the number of breast cancers were increasing.

She advised women to immediately see their doctor when they notice signs on their breast such as a Lump, hard knot, a swelling, redness or darkening, change in the size or shape, changes in the skin, itch, rash on the nipple, pulling in of your nipple, unusual nipple discharge and new pain in one spot that does not go away.

She also urged women from age 20 to start a monthly breast self-examination and see a trained medical professional for a clinical breast examination every three years starting at age 20, and annually after age 40.

“At age 40, start having yearly screening mammograms. Women less than 40 with either a family history of breast cancer or other concerns about personal risk should consult with a trained medical professional,” she noted.

She said although rare, men could also be affected by breast cancer and, therefore, urged them to partake in such screening exercises.

“As we celebrate breast cancer awareness in the month of October, we urge all persons to avoid any form of stigma associated with cancers. This will encourage all persons to report breast abnormalities early.”

Together, let us work to save more lives in Ghana,” she added.

The programmes manager also encouraged those on breast cancer treatment to continue with their treatment, noting that those who stopped often returned with a later stage of breast cancer which might be too late.

Some participants in the screening urged all women to check their breasts for cancer as the process was fast and easy.

She added that it would save them a lot of time and money associated with the treatment of a late stage breast cancer.