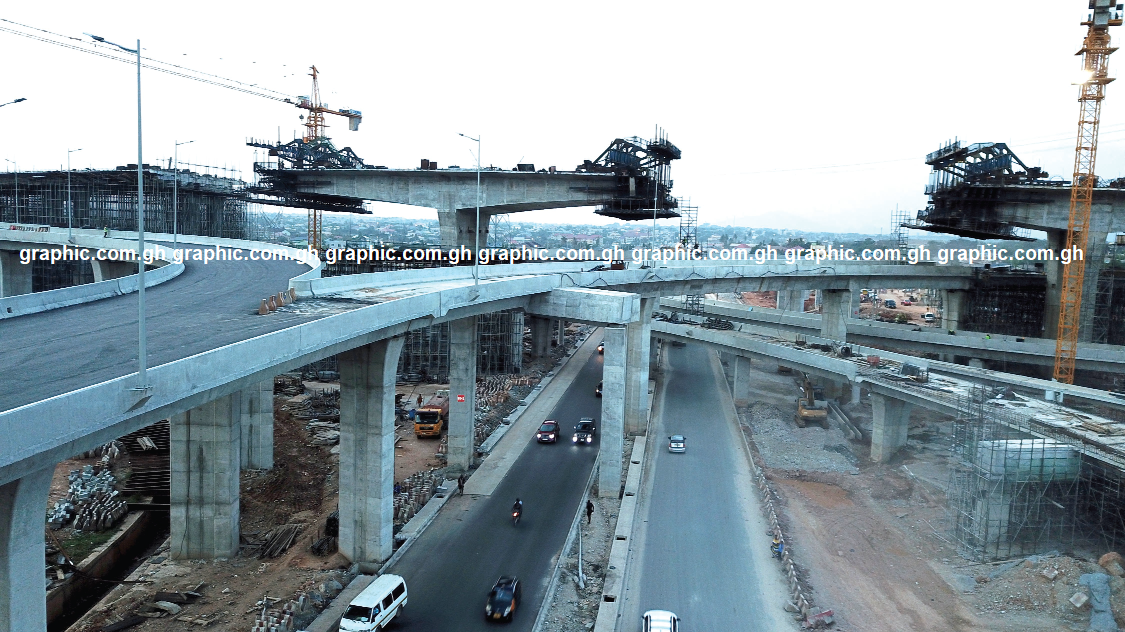 Construction work on the four-tier Pokuase Interchange which began in July 2018 is 91 per cent complete. Currently, 70 per cent of the project has been opened to traffic.

According to the Resident Engineer on the project, Mr Kwabena Bempong, the remaining works included the completion of a bridge, the fourth tier and a portion of the third tier, all of which would be completed in March this year.

“We are hoping that by the end of next month all the concrete works on the bridge, including the main deck, will be completed, while we continue with work on the street lights, asphalting, road line markings, among others,” he added.

During a visit to the construction site by the Daily Graphic yesterday, it was observed that the piles (pillars) holding the interchange had been laid, while many of the bridges on which the concrete deck would be laid had also been done.

Mr Bempong said work on the entire project was expected to be completed and the interchange opened to traffic by April this year, while the official handover would be done in June this year, barring any hitches.

“We have two stages of handover: the first is substantial completion, when about 95 per cent of the work is done, while the full handover will be done when we complete everything, and this will depend on the government,” he said.

Construction of the interchange is being undertaken by Messrs China Zhongmei Engineering Company Limited, and it is jointly financed by the African Development Bank and the government.

He said per the plan, traffic around Pokuase would soon be diverted to allow for the construction of two footbridges close to the site.

Mr Bempong said the footbridges would be completed in two months.

Mr Bempong also said the contractor had been able to manage some initial challenges on the project, which included people whose buildings were demolished, utility companies, commercial drivers and pedestrians who crossed the road indiscriminately.

He lamented the indiscipline of commercial drivers whose activities caused unnecessary vehicular traffic on the road.

“Motorists driving on the main road must drive at 50km per hour to prevent road accidents. Also, when they get to the pedestrian crossing point, they must slow down and stop for pedestrians to cross,” he said.

Some road users who spoke with the Daily Graphic commended the government and the workers on the project for the good work done.

However, a trader who spoke on grounds of anonymity said although the project was to ease traffic, her sales had been badly affected, as vehicles did not ply her way any longer.

She urged the authorities to put measures in place to ensure a win-win situation for all.