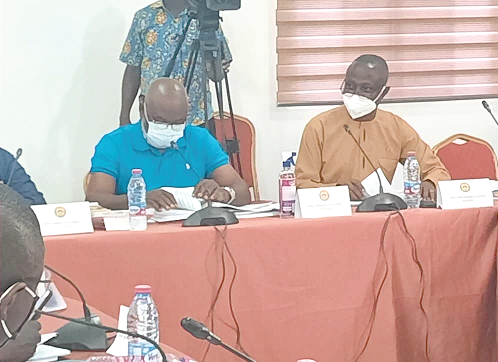 The Chairman of the Public Accounts Committee (PAC) of Parliament, Mr James Klutse Avedzi, has called for more powers to be vested in the committee to enable it to sanction erring public officials.

He said that would enable the PAC to deal with officials who lied before the committee, after taking the oath to ensure that public funds were duly accounted for.

The chairman said the failure of some officials to speak the truth before the committee had been recurring at PAC’s sittings over the years.

“Some appear before the committee and lie, even after taking the oath. If we have the powers, we can order for such persons to be picked up by the police for further investigations,” he said.

According to him, at the moment the committee could only make recommendations after interrogating officials over the handling of public funds.

Mr Avedzi made the call at the PAC’s public hearing in Tamale, the Northern Regional capital, yesterday over four Auditor-General’s reports that have been referred to the committee for consideration.

The 25-member committee will consider the Report of the A-G on Polytechnics and Senior High Schools (SHS) for the year ended December 31, 2017.

So far, the management of the Business, Bole, St Charles and Presbyterian SHSs, as well as those of the Tamale Technical University and the Wa Polytechnic, have appeared before the committee.

The 13-day zonal hearing, which will end on September 4, 2021, will also consider the A-G’s Report on the Management and Utilisation of the District Assemblies Common Fund (DACF), other statutory funds, as well as accounts of district assemblies (IGF), for the same period.

At the hearing, it was observed that there were some irregularities in the areas of procurement, contract, stores, tax, payroll, cash and recoverable transactions and charges by some of the institutions.

For instance, the committee was not happy with the Headmaster of the St Charles SHS, Mr Polycarp Kuusokub, when it was realised that his claim of submitting monthly utility bills to the Northern Regional Directorate of the Ghana Education Service for onward submission to the GES Headquarters for payment was not true.

That was after he had been queried on why the school failed to pay its utility bills, which had accumulated to the tune of about GH¢458,130, from June 2014 to October 2017.

When asked whether he had been receiving reports of bills from St Charles, the Northern Regional Director of the GES, Dr Peter Attafuah, refuted the headmaster’s claims, explaining that per the free SHS policy, the GES dealt directly with utility service providers.

Mr Kuusokub subsequently admitted his error and duly apologised to the committee.

Speaking to the Daily Graphic later, Mr Avedzi advised heads of institutions to strictly adhere to financial regulations when expending public funds to avoid such irregularities.

For his part, a ranking member of the PAC, Mr Kofi Okyere-Agyekum, advocated stiffer punishment for officials who indulged in financial malfeasance.

Besides schools, all metropolitan, municipal and district assemblies (MMDAs) in the Upper West and the Upper East regions that had also been cited in the A-G’s report will appear before the committee.