Our input must be factored into Songor Lagoon devt - Residents 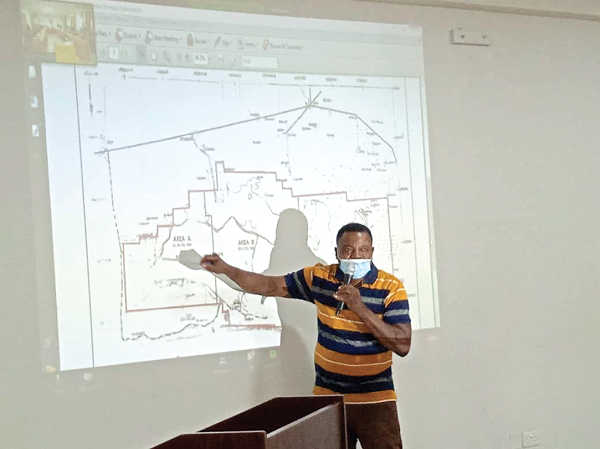 Mr Stephen Quaye, a technical expert in salt mining, using a map of the Songor Lagoon to demonstrate challenges with the Electrochem Company Ltd lease

“We are not against the development of the Songor Lagoon; however, include us and our views in development efforts,” some citizens of communities along the Ramsar Site in Ada in the Ada East District in the Greater Accra Region have said.

The people were speaking at a press briefing in Accra yesterday, during which they reacted to the issue of the lease of 158.34 square kilometres of land around the Songor Lagoon to Electrochem Ghana Limited, a salt mining company.

They entreated the government and the Ga-Dangme Caucus in Parliament to reconsider the issuance of the lease, claiming that “it is not beneficial to the communities; it lacks the permit of the Environmental Protection Agency (EPA) and has also led to anxiety and anguish among our people”.

They also alleged that the company had restricted members of communities along the lagoon who depended on it for fishing, firewood and snail picking from plying their trade.

A technical expert in salt mining, Mr Stephen Quaye, who is an indigene of the area, said the 15-year lease given to the company was inappropriate, since leases granted for salt were usually for life because salt was a replenishable mineral that needed only the sea and the sun.

He said salt production on the scale intended by the company was bound to bring about floods and effluence like brine, claiming that the company had not indicated how that was going to be taken care of.

“There is also the misconception that Electrochem Ghana is going to create jobs in the area, but that is not so.

When you look at its business plans, it is going to mechanise salt works (salt mining).

Already, it has the harvesters on site, meaning that indigenes who have hope of getting employed will not realise their dreams,” Mr Quaye added.

He further explained that one mechanical harvester could do the work of about 600 people engaged in salt harvesting with a crystalising pan.

“We are not against the development of the Songor Lagoon, but it must be developed in accordance with an existing master plan,” the expert said.

Another indigene of the area, Mr Larweh Hushie, described as unfortunate the way the lease was granted to the company by Parliament in what he described as “record time”.

According to him, the gazette notification of the lease, which was supposed to have been on the notice board of the Ada East District Assembly, was not done.

Rather, the notification was given to some individuals.

A journalist who also hails from Ada, Mr Frank Ofoe Zotorvie, said communities along the lagoon were the allodial owners of the land leased to the company, for which reason any contract on the land ought to have been between the government and the 34 communities.

The Spokesperson of the group, People Living Along the Songor, Mr Abraham Ahumah Tetteh, also claimed that the company had the approval of the chiefs of the area but not the people.

“The voice of all the chiefs put together cannot overshadow the voice of the people,” he said.

A programme officer of the Third World Network (TWN) Africa, a civil society organisation, Ms Pauline Vande-Pallen, alleged that a prerequisite for the lease, an EPA permit, had not been granted the company, hence its right to the land could be questioned.

For his part, the Coordinator of TWN-Africa, Dr Yao Graham, said the social capital gained by the company was only from the chiefs, not the people.

According to him, salt mining in countries such as India was always undertaken by outgrower sources - individuals in communities - who then supplied mineral companies, describing it as a model to sustain livelihoods.