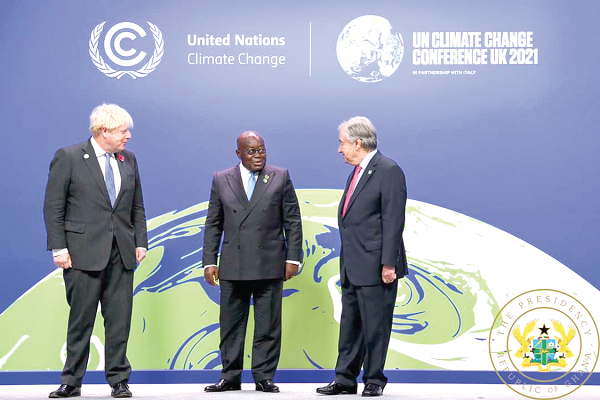 The government is to plant a minimum of 20 million trees next year as part of major effort to restore lost forest cover in the country, President Nana Addo Dankwa Akufo-Addo, has disclosed in Glasgow, Scotland.

Speaking at the World Leaders’ Summit on protecting the forests and oceans held on the sidelines of COP 26 yesterday, the President announced: “Next year, we aim to plant a minimum of 20 million trees, and we have already begun earnest preparations towards this.

“In June this year, I led the entire country, through the Green Ghana Project, to plant over seven million trees, far above the five million we had targeted,” he told the gathering of world leaders and environmentalists who are participating in the summit.

From Sunday October 31 - November 12, 2021, world leaders and environmentalists are gathering in Glasgow to participate in the 26th Conference of the Parties to the United Nations Framework Convention on Climate Change (UN COP26).

Since 1995, global leaders have met annually to firm up plans to tackle climate change. And for the summit in Glasgow, the expectation is to accelerate action towards meeting the goals of the Paris Agreement and the UN Framework Convention on Climate Change.

According to the President, in the last two decades, the government had been implementing initiatives such as the national forest plantation development programme and the Ghana forest plantation strategy, in line with measures to restore lost forest cover in the country.

That, he said, was because “deforestation and forest degradation are the greatest challenges to sustainable forest management in the country”.

The President also gave an assurance that from 2024 and beyond, Ghana intended to reduce emissions by some 10 million tonnes of carbon dioxide equivalent in the cocoa-forest landscape through the implementation of the Ghana Cocoa Forest REDD+ Programme, one of five ecological landscape-tailored initiatives in the country’s REDD+ Strategy.

He also said through nationally determined contributions in the forestry sector, Ghana was committed to supporting the global target of halving emissions by 2030 and attaining neutrality by 2050.

On the sustainable management of the ocean, the President said requisite structures and processes were being put in place to finalise the country’s sustainable ocean plan by 2025.

“The pressing threats we face are marine security due to the prevalence of piracy and armed robbery on our seas, the mounting menace of illegal, unregulated and unreported fishing (IUU), over-fishing and its attendant decline in fish stocks and plastic pollution,” he said.

President Akufo-Addo further said in partnership with the UN Division for Ocean Affairs and Law of the Sea, “we are also conducting an ocean governance study to help us strengthen our legal and institutional framework for ocean management”.

In addition, he said, the country had implemented a close season for artisanal and industrial fishing to help reduce excessive pressure and over-exploitation of the sea in order to replenish the country’s falling marine fish stocks.

“The results have been a phenomenal success.

We intend to continue to implement this policy over the medium-term.

We must leverage our collective political influence, build strong partnerships with business leaders and influencers in civil society to effectively drive the implementation of the transformation document by all countries,” the President added.