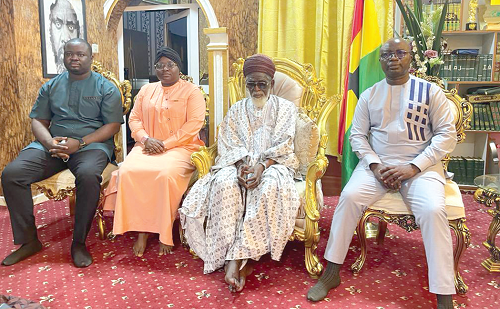 The National Chief Imam, Sheikh Osmanu Nuhu Sharubutu, has advised the management of the National Service Scheme (NSS) to develop more innovative modules that will help to build the capacity of the youth for national development.

He said the programmes should be designed in a manner that would help to exploit the potentials of young graduates in areas where the country required more human resources.

Sheikh Sharubutu gave the advice when the Executive Director of National Service Scheme (NSS), Mr Osei Assibey Antwi, paid a courtesy call on him at his office at Fadama in Accra last Friday.

The purpose of the visit was for Mr Antwi to officially introduce himself to the National Chief Imam and to seek guidance from the Islamic leader for a successful tenure of office.

Sheikh Sharubutu said no country could develop without the required human resource.

Therefore, since the scheme was posting and training the personnel who were the future leaders, it would be proper to pay particular attention to the areas that the country was lacking human resources.

Sheikh Sharubutu urged national service personnel to let the spirit of nationalism and patriotism take the centre stage of their life.

With that, he said, the personnel would be able to assist in building a just and equitable society.

Furthermore, the Chief Imam urged the young people who got the opportunity to undertake the mandatory national service to eschew laziness, apathy, rancour and other negative tendencies that had the potential to ruin their future and called on them to give of their best as they served their country.

He reminded the personnel to use the service they were rendering to prepare themselves for bigger roles in future adding that national service was a transition from youthful student life to a more mature, productive, adult working life.

Sheikh Sharubutu said it was incumbent on the young personnel to remember that very soon they would take over from the aged.

Therefore, they should be dedicated and committed to the national service by learning on the job so as to acquire the work skills and experiences needed for their personal development for the benefit of the nation and themselves .

The Islamic leader emphasised that the good work that service personnel would do could guarantee their success in future.

The National Chief Imam also advised the youth to be united and stay devoid of hatred and antagonism so as to learn from one another.

For his part, Mr Antwi explained that aside from the core mandate of deploying graduates to do one-year mandatory national service, the NSS operated farms and other commercial projects across the country which created more jobs for the youth and also boosted internally generated funds (IGF) for the scheme.

He assured the Chief Imam that his administration would continue to roll out more innovative programmes that would prepare and equip the youth to be ready for the job market.