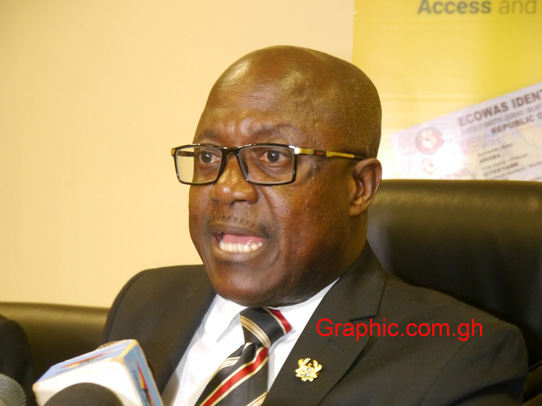 The first day of operation at the registration points opened to make the acquisition of the Ghana card more efficient, attracted good patronage as people thronged particularly the Baba Yara Sports Stadium in Kumasi and Accra Sports Stadium to be served.

This follows the decision by the National Identification Authority (NIA) to temporarily expand the registration points to meet the increased demand for the Ghana Card which has become a mandatory form of ID for most business transactions.

A similar situation was recorded at the El-Wak Stadium. However, people left and went to the Accra Stadium when they found out that the service at the former was premium services for which payment was required.

In yesterday’s edition, the Daily Graphic reported that the NIA had opened up registration points at the stadia in Accra, Kumasi and Tamale as well as the Ghana National Fire Service (GNFS) regional office in Cape Coast.

When the Daily Graphic’s team made up of Kwadwo Baffoe Donkor in Kumasi, Emmanuel Modey, Wa, and Abigail Sedinam Kortiah and Jemima Addai Okang in Accra, went round to observe the situation, they found out that even on the opening day, the response to the NIA’s intervention was high.

However, the late start of the exercise from the advertised 8:00a.m. created some anxiety among people, some of whom had reported as early as 4:00 a.m. in a bid to be among the first to be served.

At the El-Wak Stadium, the service point for the authority’s premium service, the Executive Secretary of NIA, Professor Kenneth Agyemang Attafuah, and some NIA officers were seen explaining the booking process for the premium service to some prospective applicants.

Prof. Attafuah explained that the delay was not because they were not prepared, but rather, since it was just the first day and a premium service, they were making sure that things were properly put in place to aid smooth registration.

Also, applicants needed to be briefed on how the process worked at that particular point.

An applicant who identified himself as Richard said he had earlier gone to the NIA head office, but met a huge crowd there but he was informed about a similar service at El-Wak so he made his way there and he was relieved that he was among the first to be served.

Some others were given an hourly interval bookings for the opening day.

At the Accra Stadium the crowd was quite heavy at the Media Centre where the exercise was taking place, but it was not until 9:40a.m, that the service began.

The Senior Registration Officer for Team One (A), Mr Shadrack Akrofi-Quargo, said the delay was not the fault of the officers and that some people had come to register without the required documents.

A general announcement was made to remind those in the queue of what was required while their fears were also allayed.

“It is a very simple process. Registering for Ghana Card is simple. Just get the things you require, a GPS code, a birth certificate or passport and someone to guarantee for you if you don’t have documents and you go through the process”, he noted.

He assured the people that as long as the machines did not break down, they would be able to register several people before the end of the day.

Although the exercise started a bit late, at around 9 a.m., the Area Manager, Mr David Asumado, was impressed with the turnout.

He said today being the first day, not many people might have been aware of the exercise there, but was certain that “as the days go by, people would patronise and help ease the pressure at the regional office.”

He indicated that the centre encountered a small challenge with the network and as such, those who turned out were unable to be issued with their cards instantly.

“However, from tomorrow we should be able to issue instant cards to all those who come,” Mr Asumado assured.

No pressure at Wa

Briefing the Daily Graphic at Wa, the Regional Registration Officer, Mr Moomin Mubarik, said that although the various districts had spacious offices, the regional offices lacked sufficient space to be able to abide adequately by the COVID-19 protocols.

However, that challenge has been resolved as the Regional Minister, Dr Hafiz Bin Salih, offered the NIA a more spacious office accommodation from where they currently operate and are able to effectively register 35 fresh applicants for free and replace 25 cards daily.