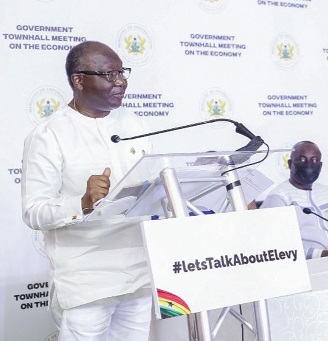 The Minister of Finance, Mr Ken Ofori-Atta, has renewed calls on Ghanaians, especially the youth, to support the passage of the Electronic Transaction Levy (E-Levy) bill and collection of the tax.

That, he said, was a better alternative to raise more revenue for development than seeking help from the International Monetary Fund (IMF).

“Ghanaians must embrace the E-Levy policy since it will prevent the government from seeking support from the IMF,” the minister said.

Mr Ofori-Atta said this in response to a question at a townhall meeting organised by the government yesterday in Wa, the Upper West Regional capital.

The minister said university students needed to study the E-Levy critically in order to influence their parents in favour of the policy.

He said students should not view the policy from political lenses but rather from the point of view of how it would move the country forward.

The minister said a lot of misinformation had shrouded the E-Levy policy, putting doubts in the minds of many people in the country.

He wondered why Ghanaians would not like to contribute a little bit of money to the growth of the country.

Mr Ofori-Atta stated that a country could only be built on taxes and it behoves the citizens to contribute their quota.

He said at the moment only 2.4 million out of the 15 million eligible taxpayers were carrying the burden of resourcing the economy.

The finance minister added that the E-Levy was an attempt to broaden the tax net and raise more revenue for development.

He said the government was making every effort to block the loopholes in the system through which funds were lost to the state.

He commended the chiefs and people for their candid opinions and response to the meeting and hoped that all the questions that were nagging their minds have been clarified.

Present at the forum were the Minister of Information, Mr Kojo Oppong Nkrumah; a Deputy Minister of Sanitation and Water Resources, Issahaku Hamidu Chinia; leaders of religious bodies, teachers, civil servants, members of the security agencies, traditional leaders and a host of business persons.

Mr Oppong Nkrumah recounted the robustness of the Ghanaian economy prior to the influx of the COVID-19 pandemic and how the deadly virus had eroded the gains we made as a country.

He said though the pandemic had caused lots of harm and economic hardships, all was not lost as the government was proactively putting measures in place to bring the economy back on track.

The minister said what was left was for Ghanaians to support the government in bringing the economy back to life through the levy.

The Minister for the Interior, Mr Ambrose Dery, who is also the Member of Parliament for Nandom in the Upper West Region, stated that the government needed more financial resources to continue with its massive developmental programmes such as the creation of employment, Free Senior High School programme and the construction of roads.

"We must generate our own resources to tackle all this since we shall not always depend on other countries who are also grappling with the COVID-19 pandemic,” he said.

The Regional Minister, Dr Hafiz Bin Salih, said the forum was part of efforts by the government to dialogue with the people and seek their input before the passage of the E-Levy law.

He commended the government for siting five district hospitals under the Agenda 111 programme.

Dr Salih called on all the people to participate effectively in the function and offer their suggestions to enrich the policy.