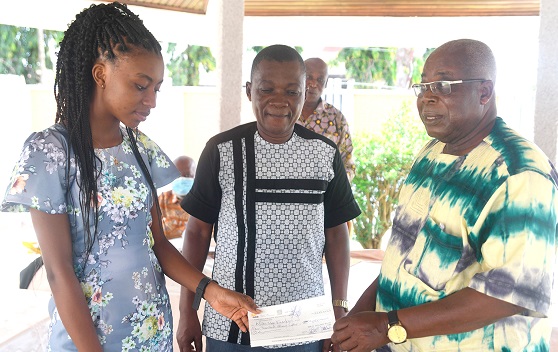 Naa Kuorkor Afutu (left), receiving a cheque from Dr Gabriel Ofoe Canacoo, chairman of the Board of Administrators. With them is Kojo Ayibor, headmaster of Ada Senior High School Follow @Graphicgh

A first-year law student of the University of Professional Studies, Accra (UPSA), Naa Kuorkor Afutu, has won the 2021-2022 Webb of Excellence Tertiary Scholarship Scheme to fund her education.

The award was instituted in 2015 by Louise Webb, a former Canadian tutor of the Ada Senior High School, to improve the lives of female students of the school.

To qualify for the award, Naa Kuorkor obtained aggregate 9 in the 2021 West Africa Senior School Certificate Examination (WASSCE) to emerge the best female student of Ada Senior High School and consequently gained admission to the UPSA to study law.

The brief but impressive ceremony, which was held at the SSNIT Guest House in Accra, was attended by the Headmaster of Ada Senior High, Kojo Kafui Ayibor, the Senior Housemaster of the school, Elvis Birikorang, the parents of the award winner as well as the three-man Board of Administrators of the Webb of Excellence Welfare Fund.

Presenting the award of a cash of Gh¢4,000 to cover Naa Kuorkor’s academic user fee and residential fee for the first year, the chairman of the Board of Administrators of the fund, Dr Gabriel Ofoe Canacoo, noted with pride that “since the institution of the award, the performance of female students of the school in the WASSCE has improved in leaps and bounds” and lauded the tutors for doing a great job.

The chairman also observed that previous winners of the award — Juliet Annang and Nyemingor Korkor Okai, who are both studying Chemistry, and are currently in their third year at the University of Ghana, as well as Esther Pamela Partey, currently in her second year as a Pharmacy student at the University of Cape Coast — continued to excel year in, year out, in their various fields of study and challenged the current winner of the award to also live up to expectation.

In her acceptance speech Naa Afutu did not only pledge to follow the distinguished footsteps of her predecessors but added that “when I finally get called to the bar, I will freely put my services as a lawyer at the disposal of the Webb of Excellence Welfare Fund so that together, we can assist more young, female girls of Ada Senior High School to live their dream”.

The Headmaster of Ada Senior High School, Kojo Ayibor, for his part, congratulated Webb for deciding to invest seed money of 3,000 Canadian dollars bequeathed to her by her late auntie into an educational fund to motivate female students of Ada Senior High where she taught some 50 years ago.

Mr Ayibor urged other former tutors as well as former students of the school to follow the trail blazed by Miss Webb with the view to making Ada Senior High School one of the best in the country.