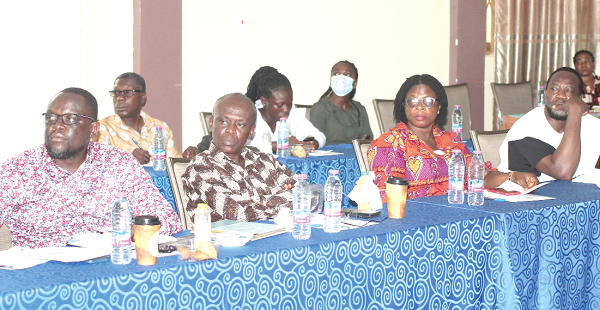 Participants in a national dialogue on climate change adaptation financing have underscored the need for a tracking system to monitor the utilisation of funds allocated in national budgets for climate change activities.

That, they said, would enhance the monitoring and evaluation of such programmes aimed at mitigating the effects of climate change in the country.

According to them, although governments had been making annual allocations of funds in budgets for the fight against climate change, the funds were not targeted or specific, making monitoring and reporting on them difficult.

The participants, drawn from civil society organisations, ministries, departments, agencies, among others, also called on the media to follow up on climate change programmes for which funds had been allocated in budgets and report on them effectively to whip up the interest of the citizenry.

They observed that the fight against climate change was a collective responsibility on the part of the citizenry, the private sector and the government, and all must play their part to mitigate its effects on the country.

The participants expressed these views at the national dialogue held in Accra yesterday to assess the government’s commitment at the global, continental and national levels towards mitigating climate change impacts on the country and examine the level of its climate change financing.

It was organised by SEND Ghana, a non-governmental organisation, with support from Oxfam.

The Programmes Officer of SEND Ghana, Dr Isaac Nyarko Kwakye, who presented a desk study report on climate change adaptation financing conducted by his outfit, said Ghana had made strides in its commitment to climate change mitigation and adaptation.

He said the sources of funding for climate change activities in the country had been the central government and its donor partners, with the funds geared towards building a climate resilient economy.

He said the study, which was to look at how Ghana had committed to climate change adaptation financing, revealed that the government had completed two Climate Public Expenditure and Institutional Reviews (CPIERs) in 2015 and 2021.

He said the 2015 CPIER helped to identify some of the instructional challenges, including how climate change resources were allocated.

The 2021 CPIER, he said, showed that the country spent GHc14.5 billion on various climate change interventions from 2015 to 2020, which represented an average of 3.94 per cent of total government expenditure.

He said majority of the funds came from multilateral sources, with the largest contributor to the country's climate actions being the Green Climate Fund.

Dr Kwakye said although the government had been making allocations of funds for climate change in the national budget annually, the funds were not geared towards a particular intervention.

He, therefore, called on the government to prioritise domestic funding of climate change mitigation and adaptation programmes by making specific allocations in the national budget.

He also called on the various metropolitan, municipal and district assemblies to, as a matter of priority, allocate funds in their annual budgets for specific interventions on climate change.

The Deputy Country Director, SEND Ghana, Dr Emmanuel Ayifah, in his opening remarks, said as part of SEND Ghana's strategic plan for the next five years, which began from 2021 and would end in 2025, climate change would remain one of SEND’s focus areas.

He said the project would be scaled up with field visits to look at the various interventions being undertaken to mitigate the effects of climate change in the country to ensure that the interventions made the desired impact.