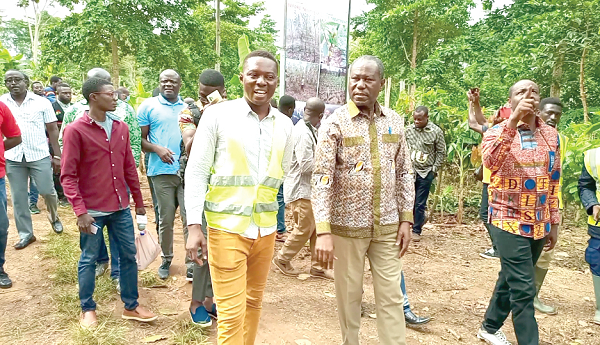 A total of 51,537.85 hectares out of the 487,386.23 hectares of cocoa farms in the Western North Region affected by the swollen shoot disease have been rehabilitated under the National Cocoa Rehabilitation Programme (NCRP).

The programme, instituted in 2017 by the Ghana Cocoa Board (COCOBOD) with financial support from the African Development Bank (AFDB), involved the treatment of the affected farms and replanting them with disease-tolerant, early bearing and high yielding cocoa varieties.

There was also payment of agreed compensation to farmers and landowners and maintenance of farms for up to two years after the plantation.

Speaking during a tour of some rehabilitated farms in the Western North Region to assess the progress of the programme, the Chief Executive of COCOBOD, Joseph Boahen Aidoo said to ensure the progress of the industry, it was important to spend and get the farms working again.

“In 2017, when we took over, we thought it wise to come up with measures to save the situation, leading to the rehabilitation programme to give hope to our farmers and to improve income, among others,” he said.

Mr Aidoo observed that one significant progress made was the new approach where the farmers interspersed their cocoa farms with economic trees, which provided shade for the cocoa trees to do well and provided intergenerational income for farmers and descendants.

He urged the farmers not to only look at the planting of cocoa but also ensure that the economic trees were planted properly.

He further advised them against planting a lot of cassava in the farms since they would compete with the cocoa trees for water and other nutrients.

The chief executive explained that there were crops such as plantain that were permitted at some portions and it was mainly for consumption and the excess to be sold.

He reminded the farmers of plans to deploy irrigation technology for continuous farming even during dry seasons to maximise yield and reposition the country on the global stage.

COCOBOD began the rehabilitation of cocoa farms affected by swollen shoot in the Western North Region to reverse the continued dwindling of cocoa production in the area.

The move was necessitated by the destructive effect of the disease on cocoa trees in the region, which used to produce about one-third of the nation’s annual cocoa output but which is now a pale shadow of itself due to the devastation caused by the swollen shoot virus.

The COCOBOD expressed worry about the situation, which had a serious effect on the national output, hence the urgent intervention.