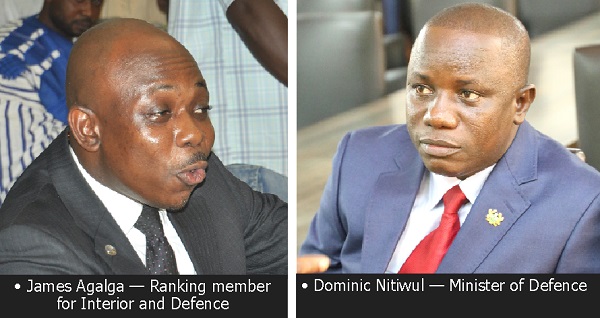 The Minority in Parliament have expressed their displeasure over what they claim "the politicisation of the security services".

They alleged further that some unqualified persons who were attached to the government had been recruited into the various security agencies.

They claimed the recruitment was no more based on meritocracy for one to be promoted in the Ghana Armed Forces (GFA).

Addressing journalists in Parliament yesterday, the ranking member for Defence and Interior, James Agalga, said the "grand scheme" was to create a security apparatus loyal not to the state but to the ruling New Patriotic Party (NPP).

"The promotion in the security sector, which was hitherto based on merit and performance, is now heavily politicised," he said.


But the Minister of Defence, Dominic Nitiwul, rebutted the allegations by the Minority saying there was no way recruitment into the security agencies, including the GAF, could be influenced.

He outlined seven processes a prospective applicant to the GAF had to go through to qualify.

He mentioned them as body selection through to medicals and interviews.

He, therefore, allayed the fears of Ghanaians saying the military was credible and it was the reason the United Nations always relied on it.

On promotions within the GAF, Mr Nitiwul said it was based on merit and performance and not politics as being alleged by the Minority

Mr Agalga, a former Deputy Minister for the Interior under the National Democratic Congress (NDC) administration alleged that there was a deliberate disregard for the point system relied on for the promotion of officers within the Armed Forces.

According to him, the point system was based on meritocracy where serving officers built up points for promotion on assessment.

The Member of Parliament (MP) for Builsa North Constituency said in place of the point system, promotions and appointments were now based on perceived party loyalty to the extent that officers with disciplinary problems had sometimes been promoted.

"We have also become aware of the preemptive appointment and deployment of officers in the various security services, including the Armed Forces with bad reputation in sensitive positions with Elections 2024 in mind," he said.

The Minority promised to continue to monitor the developments with an eagle eye.

Responding to an earlier allegation of the government harbouring mercenaries at the Jubilee House and being trained at Asutsuare, Mr Nitiwul insisted recruitment of thugs was not in the veins of the NPP and that there was no way the current President would encourage it.

To him, the next President would be chosen by the people of Ghana and the President sworn in on January 7, 2025.

He said the alleged hiring of mercenaries to tilt the 2024 elections in favour of the NPP was false and should be disregarded.