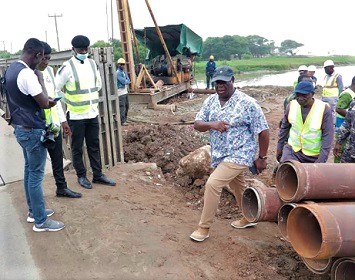 The Minister of Roads and Highways, Kwasi Amoako-Attah, has expressed satisfaction with the progress of work on the La Beach Road project in Accra.

“I am certain that this whole project will be completed in the first quarter of next year; we will also do our part to ensure that it does not go beyond April next year.

The minister, who was on an inspection tour of the project yesterday, also inspected work on the flyover at the Flower Pot Roundabout.

Work on the Flower Pot project is scheduled for completion in December next year.

Briefing the minister, the Project Director, Emmanuel Degbotse, said “on the original design, we have done about 50 per cent, but because the project has been reviewed and expanded, we are now at 25 per cent”.

“If everything goes well and we have good cash flow, we will complete it in December next year,” he said.

The tour was to enable Mr Amoako-Attah to get first-hand information on the progress of work so far on some road projects within the national capital.

He was accompanied by some directors from the sector ministry.

The GH¢147-million project is being undertaken by China Railway NO.5 Engineering Ghana Limited.

It involves the construction of an 800-metre viaduct across the Accra-Tema Motorway and the Flowerpot Roundabout along the Spintex Road.

The scope of work includes a dual carriageway on the viaduct, with asphalt concrete surfacing and a ramp from Shiashie onto the viaduct towards Airport Hills.

Additionally, a new road will be constructed through the old tunnel at East Legon, as well as an additional exit into Cantonments from the Giffard Road Interchange.

During the visit, there was massive work going on, with the construction of a dual carriage road and drainage systems which were near completion, while work on other service lanes had been completed.

Piers had also been mounted, while traffic management had begun around the Palace Mall to create space for the erection of more piers around the area.