MDAs expenditure budget to be cut by 20% 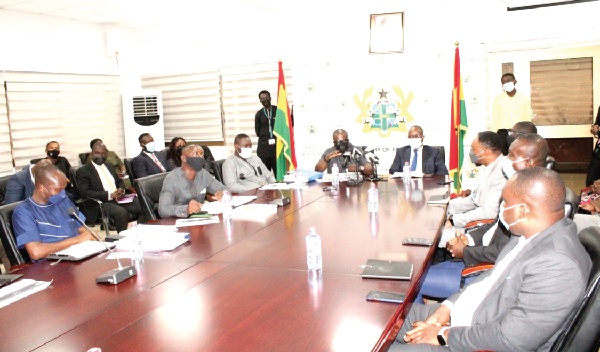 The expenditure budget of ministries, departments and agencies (MDAs) is to be cut by 20 per cent this year as part of measures to ensure fiscal consolidation by the government.

The expenditure cut, which will commence in the first quarter of this year, will neither affect economic growth nor the fiscal deficit target for 2022, the Minister of State at the Ministry of Finance, Mr Charles Adu Boahen, has said.

According to the minister, who was addressing a press conference in Accra yesterday, a chunk of the budget of MDAs and metropolitan, municipal and district assemblies (MMDAs) went into compensation.

He said the downward adjustment could result in an expenditure cut of GH¢20 billion this year, describing the measure as necessary to help align spending to revenue mobilisation.

“So every quarter when we do our budget allotments, the resource envelope we will provide for the MDAs will be 20 per cent less than usual,” he added.

The press conference was to spell out efforts by the government to regain investor confidence and also address challenges facing the economy, after closing a non-deal investor roadshow, a three-day meeting with domestic and foreign investors in Accra.

Senior officials from the Ministry of Finance and the Bank of Ghana (BoG) briefed participants on Ghana’s economic performance and outlook.

Also present were the First Deputy Governor of the BoG, Dr Maxwell Opoku-Afari; a Deputy Minister of Finance, Dr John Kumah, and executives of banks and other financial institutions.

The roadshow also enabled the government to engage both offshore investors, comprising banks and fund managers, and onshore investors to update them on how it had fared with 20221 budget targets and plans for achieving 2022 targets.

They also responded to questions and addressed the concerns of investors as part of efforts to regain their confidence to ease the rising cost of Ghana’s bonds on the international market.

Mr Adu Boahen said the government was committed to the policy and would ensure that the quarterly expenditure ceilings of an approved budget would include up to a 20 per cent downward adjustment, beginning the first quarter of 2022.

“We also have statutory payments and transfers which are automatic and thus limits the amount that is flexible, and this is informing the 20 per cent cut,” he said.

The minister said the investors sought clarity on the economic performance and outlook, Ghana’s relationship with the International Monetary Fund (IMF) and whether or not the government intended to undertake any programme with the fund.

He said they also requested for the status of the electronic transactions levy (E-Levy) Bill before Parliament, the 2022 revenue target and the government’s ability to meet the target, and the non-accessibility of the international capital market and its implication on the country’s reserves position.

On the IMF, Mr Adu Boahen said the government would maintain and strengthen the country’s current relationship with the fund.

“The IMF remains a trusted advisor to the government and continues to engage the government through multilateral surveillance, technical assistance provision and capacity building.

“In July 2021, the IMF successfully conducted an Article IV Consultation with the government and engaged the authorities during staff visits.

The government will continue to share regular updates on the economy with the IMF and remain optimistic for an Article IV Consultation in the first half of 2022,” the minister said.