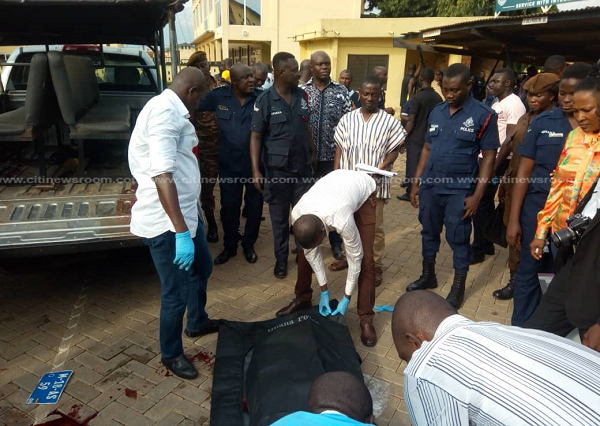 The Commonwealth Human Rights Initiative (CHRI) Africa office is calling for an independent body to investigate the killing of seven suspected armed robbers at Manso Nkwanta near Kumasi in the Ashanti Region by the police.

According to the group, as a matter of legal policy and democratic accountability to the public, the police cannot simply resort to the use of deadly force with such fatal consequences on the excuse that the victims were suspected armed robbers without recourse to the strict rules of evidence.

The group is also urging the police to make public the findings of the investigation into the killing of the seven in line with international best practice and the principles of democratic policing.

It also wants the police to apply the full sanction to any officer found culpable in the killing of the seven individuals.

The Commonwealth Human Rights Initiative (CHRI) Africa Office is appalled at the news of the killing of 7 suspected armed robbers by officers of the Ghana Police Service in Manso Nkwanta near Kumasi on July 2018. CHRI would like to express our condolences to the bereaved families. This current bizarre incident once again brings to the fore the urgent need for an independent body to investigate the police when incidents like this occur, an issue successive governments have ignored.

Information available from media reports that the victims were gunned down by a team of policemen from the Ashanti Regional Police SWAT Unit who claimed the suspects opened fire on them. According to the officers the victims allegedly belong to a gang of robbers who killed their colleague Lance Corporal Daniel Teiku on July 1, 2018.

Interestingly, less than 24 hours after the news broke several people including the Municipal Chief Executive of the area, the Chief Imam, the youth and even the Honourable Member of Parliament for the area Mohammed-Mubarak Muntaka, have come out to vehemently refute the police’s story that the victims are suspected robbers. Once again, as in previous and in several instances where the police have killed people alleging that they are suspected armed robbers, it seems that is not the case. This is a very worrying trend that has prevailed for several years. In in 2013, the police chased and killed two of their own, initially claiming that they were suspected armed robbers who were running away from them. As of the public has not been informed of the outcome of the investigations into that incident and several other such incidents that have happened over the years. It is obvious that the Ghana Police Service does not think Ghanaians whose taxes are used to run the Service have a right to know.

As a matter of legal policy and democratic accountability to the public, the police cannot simply resort to the use of deadly force with such fatal consequences on the pedestrian excuse that the victims were suspected ‘armed robbers’, without recourse to the strict rules of evidence. Given that there are clear national and international standards regulating police conduct the use of force and the infliction of justifiable harm, the police owe it a duty to the public and in particular, the families of the deceased, to explain in detail, the situation necessitating the use of deadly force, the level of force used, the outcome and any remedial measures to forestall future occurrences, including appropriate sanctions.

CHRI is aware that police officers who deal with crime often respond to very dangerous situations that require them to resort to the use of firearms in line with their wide discretionary powers. This power is however regulated by national and international law. It is not good enough to just inform the public that the victims are suspected robbers. In this particular incident as in many others that have happened over the years, there are more questions than answers and it does not do the police’s image any good especially when the Service has rolled out a Transformation Agenda. That agenda needs public support and the public will only support a transparent, credible and accountable institution. This means that the police can no longer investigate themselves and keep any report or findings to themselves as an operational document. The Police Professional Standards Bureau as it is now called is fit for purpose ONLY as an internal operational Department; Ghanaians need better than that.

We call on the Inspector-General of Police to matter of urgency to:

• Make public the findings of the investigation into the killing of the seven individuals in line with international best practice and the principles of democratic policing;

• Apply the full sanction to any officer found culpable in the killing of the seven individuals;

• Present to Parliament, the Ministry of Interior and the general public, a comprehensive plan of action to address the use of deadly force by the Ghana Police Service with a view to reducing the incidence to the barest minimum.

We urge the Commission for Human Rights and Administrative Justice (CHRAJ), in its oversight responsibility the police should independently investigate the circumstances leading to the death of the seven individuals and make its recommendations public.

We further strongly recommend that the Ministry of Interior immediately convene a meeting of stakeholders working in and on the Police Service from both governmental and non-governmental institutions to discuss and prepare a roadmap for the establishment of an independent police complaints commission or authority for Ghana.