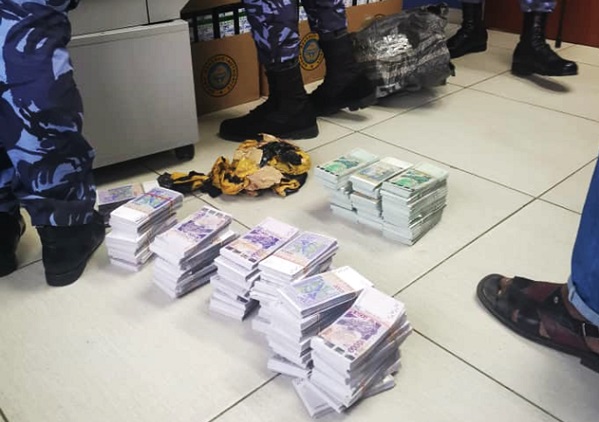 A 57-year-old man has been arrested for attempting to smuggle fake currency with a supposed value of CFA80 million into the country through an unapproved route at Aflao near the Ghana-Togo border.

The amount is equivalent to GH¢1.5 million.

The suspect, identified as Aremu Timothy Adeyboyegu, was arrested while he was a pillion rider on a motorbike he was using to cross into Ghana.

The money was found in a backpack he was carrying, which also contained CFA843,000 and 110,500 naira in genuine notes.

He was arrested by personnel of the Customs Division of the Ghana Revenue Authority with support from the Ghana Immigration Service, the Narcotics Control Commission, the Ghana Armed Forces and the Ghana Police Service involved in border management at the Aflao- Ghana border.

The Commissioner of the Customs Division of the GRA, Alhaji Seidu Iddrisu Iddisah, said the suspect was arrested about 4 p.m. last Tuesday during the division’s surveillance operations.

He said he would be handed over to the police for prosecution depending on the outcome of the investigation.

He said the suspect breached the law on proper declaration of money, and that he would be charged for attempting to circulate fake currency in Ghana.

He added that the action of the suspect might have other criminal implications, and "if there is a need to contact our Nigerian counterparts and other security agencies in the sub-region, we will do so".

He said in line with the law, "goods must come to Ghana through the approved route and must be declared to the customs officials who would demand if the person needs a permit or licence, or will intercept them if they are banned goods".

Investigations, he said, would also determine if the money the suspect was carrying was proceeds from other crimes.

"Investigations will help establish how the money was printed, who printed it and who he was bringing it to in Ghana. It takes some degree of knowledge to know a currency is fake, and most traders might not pay attention to some security details on a currency unless they take it into a bank or an institution that has a system for detecting fake currency," he said.