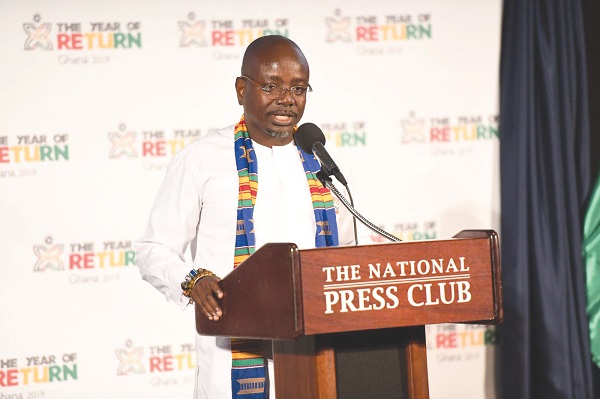 TOURIST arrivals in the country for December last year rose by 16.37 per cent to 98,873, showing a strong recovery from the heady days of the COVID-19 pandemic.

Using data from the Kotoka International Airport, the Ghana Tourism Authority (GTA) said the highest tourist arrivals for the month of December in recent times had been 116,438 international arrivals from all entry points in 2019, a feat achieved due to the Year of Return.

However, the numbers declined in 2020 to 43,645, representing a 62.52 per cent decrease to the COVID-19 pandemic, which came with travel restrictions.

Subsequently, in 2021, the numbers picked up by 94.67 per cent to 84,965 and continued the upward cruise to 98,873 last December, which impacted widely on all sub-sectors of the tourism industry.

The GTA attributed the uptake in tourist arrivals largely to its December in Ghana (GH) initiative.

“This has not only exceeded expectations, it has put Ghana on the global map and it is something Ghana should be proud of,” the Chief Executive Officer (CEO) of GTA, Akwasi Agyeman, said in an interview with the Daily Graphic.

“It makes me confident that what we started is yielding fruits and if we build on it, Ghana will become the number one destination in Africa.

Over the period, December in GH has become a clarion call for all the global African family to reconnect around our arts and culture,” he added.

Mr Agyeman added that December in GH was part of the Year of Return (YoR) initiative of the GTA to promote the country as a December holiday season destination for Ghanaians living abroad and the African Diaspora, insisting that gradually, the initiative had taken on a life of its own.

“It has expanded beyond just holiday season events to a campaign that is defining Ghana as the Mecca for Pan Africanism and also spotlighting it as the official Christmas party destination,” he said.

December in GH, which is now part of YoR sequel, Beyond The Return, is a new wave that promotes African music, fashion and food through events such as concerts, stage plays and fashion shows as well as nonstop beach parties, all-day street festivals and all-night concerts featuring popular foreign and local acts.

Last December, the GTA endorsed about 122 events out of which 113 were held successfully, with nine being cancelled.

Participation
Describing the turnout of events at last year’s December GH celebration, Mr Agyeman noted that there was a major increase in participation.

“We saw a lot of participation, more proposals and events in 2022, more than in 2019, so in terms of turnout we are excited.

The impact of the participation was so overwhelming that some of the events extended to other regions. We were able to encourage some of the private event organisers to move some of the events outside Accra, so we had events in the Eastern Region, the Central Region and the Upper East Region,” he noted.

Due to that, the CEO of GTA added that his outfit, under the auspices of the Ministry of Arts, Tourism and Culture, was considering leveraging other peak months.

“What we are looking to do is to look for other peak months to complement December.

We want to see what we can do so that all through the year, Ghana will be on the map for travellers.

We are not leaving anything to chance,” Mr Agyeman noted.

Post stakeholder engagements
Despite the successes of last year’s December in GH, there were few lapses that the GTA believes could be improved to make the next edition more successful.

To bring this solution to the fore, the GTA organised a two-day post stakeholder engagement on Thursday, January 11, and Friday, January 12, this year.

“The meeting was for them to share their thoughts on the last edition and give recommendations for the subsequent ones,” the CEO of GTA, Mr Agyeman noted.

Event organisers
Some of the recommendations included penalising headline artists for late arrival, event endorsement should come on time to make room for early sponsorship requests, and event grounds should have relevant equipment such as speakers and lighting readily available to reduce time spent setting up.

The Vice-President of Events Professional Association, Kojo Poku, stressed the need for event organisers to take the concerns seriously.

“If we want to achieve our goal, especially having international acts come down to perform, we need to invest in equipment.

I found myself wanting at the Global Citizen Festival last year just because we did not have some of the lighting systems the headliner, American singer, Usher Raymond, requested.

Let’s up our game,” he told the Daily Graphic on the sidelines.

Hotels listed under the December in GH 2022 made brisk business, with some facilities such as Alisa Hotel turning down some guests due to lack of space.

However, some individuals who had converted their plush homes into lodging facilities, popularly known as “Air BNB”, also cashed in on the tourist inflow, as tour operators also had their fair share of the tourist spend.

“It was really profitable; we had a lot of tourists.

You see, because we were listed to be credible by the team, it made it easier for people to trust us and do business with us,” the CEO of BT Express Service, a tour operator, Nana Basoah Boakye, said.

President of Heritage Food and Drinks Association, Gloria Colley, noted that being a part of December in GH created jobs too.

“We sensitised caterers serving at the various events about the need to introduce Ghanaian food on their menus.

Some of them hired more hands to help with services and it translated into increased sales,” she noted.

Car rentals
Even though car rental companies also cashed in, the President of the Car Rentals Association of Ghana, Seth Ocran, bemoaned how some private cars were turned into rental cars overnight.

“Just within that period a lot of private cars were turned into rental ones which is not a bad thing, but these people lacked good customer service,” he said.

Mr Ocran said whatever service they rendered was for the moment, unlike members of the association who wanted to retain customers so treated them with respect and dignity.

“Therefore, some customers experienced bad services and it has given us a bad name,” he said.

Aside from that, Mr Ocran suggested that taxi drivers should also be educated on the importance of customer service since they were usually the first port of call when people arrived.

Framework
The stakeholders also want a redress system to be available so that patrons of events could express their grievances.

“This will also help the GTA get feedback and monitor what is happening and at where.

Also, a framework was needed to regulate events and grant permits. This, the stakeholders noted, will help facilitate inspection of venue, stage, entry gates among others.”

“Event organisers should be answerable to someone,” customer service consultant, Eric Prempeh, stated.

Security
Regarding security, it was disclosed that security had improved from the years before.

However, it was indorsed that event organisers be given clearance sheets with safety and security requirements based on anticipated numbers.