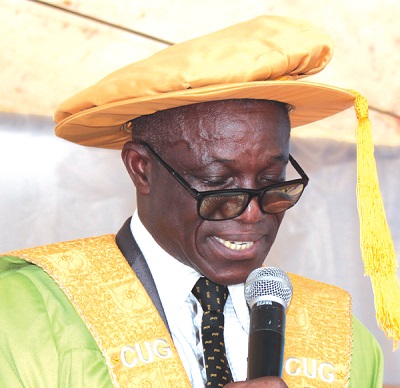 All major Catholic seminaries in the country will be converted into satellite campuses of the Catholic University once it receives the Presidential Charter later this year.

This will save the church from having to send large numbers of its priests abroad to pursue their Master’s and PhD programmes.

Speaking in an interview with the Daily Graphic on the future of the university after the charter is granted, the President of the Catholic University College, Professor Daniel Obeng-Ofori, said within five years of receiving the charter, the arrangements it had in place would make the university one of the largest in the country.

The university college applied for the award of the charter in 2019 after being affiliated to public universities for over 10 years.

Recently, the Ghana Tertiary Education Commission (GTEC) announced that three faith-based university colleges had met the criteria for the award of a Presidential Charter.

According to the university college, it had received a letter to that effect and was currently awaiting the presentation of the charter.

Prof. Obeng-Ofori said even as the college awaited the presentation, it was putting its house in order to ensure that the weaning from its mentor universities was seamless.

He said the college was aware that being awarded a charter came with a lot of responsibilities.

Prof. Obeng-Ofori gave an assurance that the college was up to the task and "we are aware that it comes with greater responsibility.”

"We are going to redouble our efforts, reorganise ourselves, infrastructure, faculty and programmes to move on as an autonomous institution awarding our own certificates and degrees," he stated.

Consequently, he said, the college was looking at developing a strong base in its MPhil and PhD "so that many of our priests who are trained outside will now be trained locally here."

Prof. Obeng-Ofori said the university college had the largest number of MPhil and MSc graduates in public health in the country and was going to leverage that to mount its PhD programmes.

He said the college community was excited with the news, adding that "we have achieved this collectively through hard work with discipline and dedication".

He expressed gratitude to the Ghana Catholic Bishops Conference for its immeasurable support for the running of the college and also the Catholic Church as a whole as well as the entire staff of the university college for the success chalked up so far.

Touching on niche programmes, Prof. Obeng-Ofori mentioned Public Health and Public Health Nursing, considering the fact that the college was the first to introduce the two programmes in the country.

He said the university was also strong in education and that its future direction would include Law.

He said when the college introduced the public health programme, a number of nurses rushed in to pursue it; "unfortunately, when they completed, they were not upgraded. So we have to put together a two-semester intensive programme for all such nurses to pursue Public Health Nursing to enable them to get the needed promotion."

He explained that when the programme was rolled out last year, about 100 of such nurses took advantage of the opportunity.

“This year, 150 enrolled. We are hopeful that within the next five years, the programme will be the flagship one for the university,” he added.