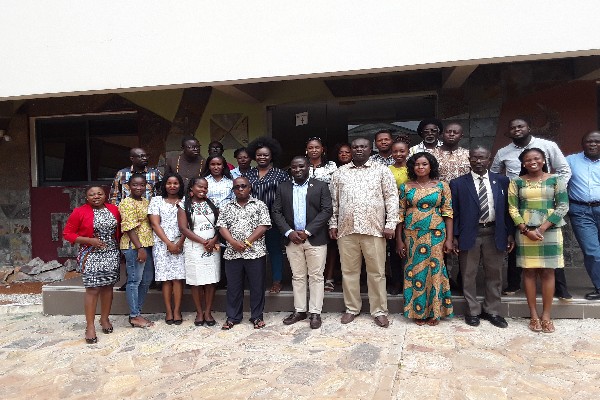 The participants in a group photograph with officials from the UNDP and MESTI after the opening session
30.5k Shares

Dubbed: "Media training on coverage of climate change and green economy-related Sustainable Development Goals (SDGs) in decentralised development work," the training was organised by the United Nations Development Programme (UNDP) under the auspices of the United Nation’s Partnership for Action on Green Economy (PAGE).

PAGE is a flagship UN-inter-agency programme to support participating countries to transition to an inclusive green economy, which is about activities that result in improved human well-being and social equity while significantly reducing environmental risks and ecological scarcities.

Touching on the workshop, Mrs Nyadia said media training on coverage of climate change and green economy "is critical to ensuring we transition to green economy and meeting our climate targets."

She noted that Ghana over the years has taken important steps to implement green economy policies, including the ban on the importation of incandescent lamps, and the energy efficient refrigerator replacement rebate scheme.

She explained, for instance, that the ban on the importation of incandescent lamps and the energy efficient refrigerator replacement rebate scheme have resulted in significant reduction in energy consumption in the country.

She said would continue to work closely with the United Nations agencies, the private sector and other stakeholders to further strengthen partnership and efforts towards green industry and businesses through science, technology and innovation.

The workshop, which brought together journalists and media practitioners from Central, Western, Volta, Eastern, and Greater Accra regions intended to deepen their understanding of the principles and concept of climate change, climate change impacts and related SDGs.

Similarly, the training was aimed at improving the understanding of the participants of the mainstreaming process of the Metropolitan, Municipal and District Assemblies (MMDAs), effective reporting on climate change and SDGs and how to hold duty bearers accountable.

Similar training will be organised for journalists and media practitioners in Ashanti, Brong Ahafo, Northern, Upper East and Upper West regions in July.

The UNDP Programme Coordinator, Mr Kingsley Bekoe, said one of the key ways of creating awareness on climate change and economy was to support capacity strengthening such as the training of key stakeholders, including journalists and media practitioners.

He said the training of the journalists and media practitioners would help in the mainstreaming of climate change and green economy SDGs into the development plans of MMDAs.