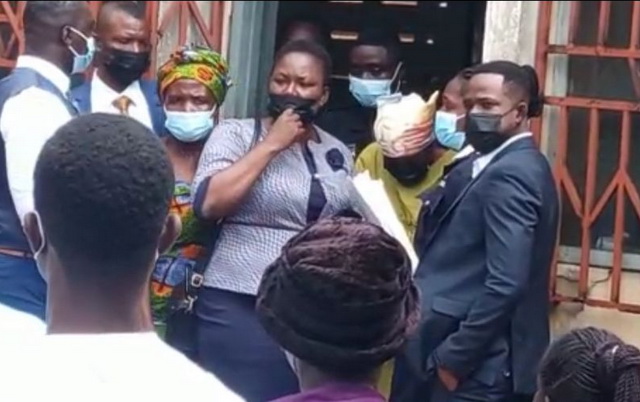 Ms Josephine Panyin Mensah, the lady at the centre of the “fake pregnancy and kidnap’ controversy in Takoradi, remains in custody at the Takoradi Police Divisional Command cells more than 24 hours after she was granted bail.

Josephine is yet to satisfy conditions set for her by the Circuit Court when it granted her bail on Monday, September 27, following her arraignment in court by police for allegedly deceiving a public officer and publication of false news to put fear in the public.

She has pleaded not guilty to the two charges.

The Takoradi Circuit Court A, presided over by his Honour Michael Cudjoe Ampadu granted her GH¢50,000 bail with two sureties, one of which was to be justified.

According to him, should they be unsuccessful to meet the conditions set for her release, they may have to appeal to the court to vary or reduce the bail condition as it appears very stringent.

Asked how his client is doing, Mr. Buckman said Josephine is all calm and awaiting her release ahead of her next scheduled return to the court on October 14, 2021.

Upon her return to police custody following her appearance in court on Monday, Josephine was said to be in high spirits, expecting to return home to rejoin her family, and paced up and down the female cells full of hope. Her new reality appears to overshadow that expectation.

Background
Josephine was said to have left her home early morning of Thursday, September 16, on the pretext of going for jogging. She was later reported missing, during which time someone is alleged to have called the family to demand a ransom for her release because she had been kidnapped.

The husband reported the matter to the police, which began a search for the woman who was said to be nine months pregnant.

Police investigators and health experts later discounted her stories – both pregnancy and kidnap, leading to her arraignment before the court.