Hundreds troop to Bakatue after 2 years of ‘quiet’ celebration 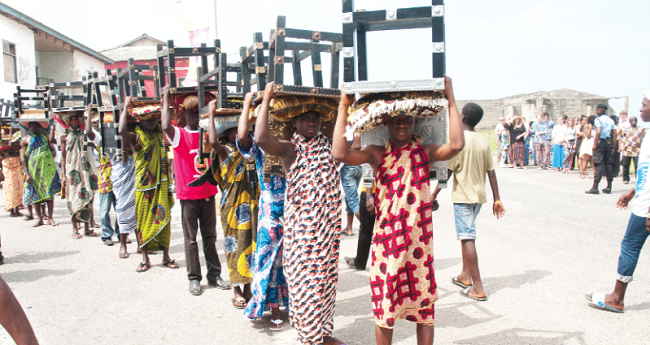 Rites have been performed at the banks of the Benya Lagoon in Elmina in the Central Region to traditionally lift the ban on fishing in the lagoon.

The lifting of the ban, Bakatue, would allow for basic fishing in the lagoon.

Traditional authorities indicated that the lifting of the ban on fishing in the lagoon was a traditional rite and did not in any way affect the Ministry of Fisheries and Aquaculture's closed fishing season imposed on marine fishers.

This year's festival marked the return to crowded celebration of the ceremony after COVID-19 protocol and regulations compelled traditional authority to limit the Bakatue to only the rites.

Only the rites were performed to mark the occasion but this year’s saw a return of the festival to its momentous patronage and graceful performances.

Hundreds of patrons, including indigenes, visitors, tourists and foreign students joined to make the occasion a memorable one.

Chief priests together with the Omanhen of the Edina Traditional Area, Nana Kwadwo Conduah VI, performed traditional rites in the Benya Lagoon after which a fishing net was cast three times to mark the lifting of the ban.

Fish caught was presented to the Omanhen, who in turn presented them to dignitaries present.

There was a display by mostly women groups on canoes with the traditional colourful Tekua, a traditional head style on the lagoon that added excitement to the occasion.

In a speech, the Marketing Director of the Ghana Tourism Authority, Roberta Dawson-Amoah, said the authority was happy to join the traditional authorities to celebrate the festival this year after a two-year break and in spite of what was happening across the globe.

She noted that the theme for the celebration, “Eat Ghana, Wear Ghana, See Ghana, Feel Ghana”, was extremely relevant in promoting made in Ghana and its products, sights and people to promote economic development.

She further urged all to appreciate everything Ghanaian, including festivals and values, for posterity, adding “these played major roles in promoting tourism and in raking in some revenue for development.”

The Municipal Chief Executive of Komenda-Edina-Eguafo-Abrem, Solomon Ebo Appiah, said the Bakatue of the people of Elmina was a world renowned festival and it was important to further develop it to maximise its potential.

He noted that the municipal assembly was in talks with some interested stakeholders to construct a canopy walkway over the sea in Elmina to further promote tourism in the area.

Renowned businessman and politician, Dr Paa Kwesi Nduom, pledged to support the development of government agencies in bringing the needed development to the area.