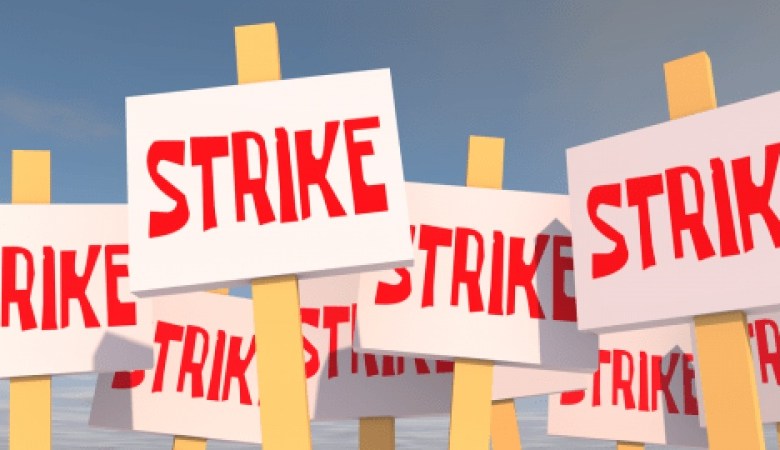 A coalition of four Associations of health workers have served notice that they will embark on industrial action in a move to demand a 20 percent Cost of Living Allowance (COLA).

In a series of moves that intended to grind healthcare delivery at public facilities to a halt, the four groups namely; the Ghana Medical Association (GMA), Ghana Registered Nurses and Midwives Association (GRNMA); Health Services Workers' Union (HSWU); and Government and Hospital Pharmacists Association (GHOSPA) say if negotiations on COLA are not completed by July 22, 2022, they will embark on a series of actions that will disrupt the health sector.

A press release jointly signed by the General Secretary of the GMA, Dr Titus K. Beyuo, the President of the GTNMA, Mrs Perpetual Ofori-Ampofo; the General Secretary of the HSWU of the Trade Union Congress and the Chairman of GHOSPA, Pharmacist Nathan Coompson said the action will begin with the wearing of red arm/wrist bands in all health facilities between July 25 - July 27, 2022.

This will be followed by the withdrawal of Out-Patient Department (OPD) Services between July 28 to July 31, 2022.

The coalition also intends to climax the protest with the withdrawal of OPD and In-patient services on August 1, 2022. 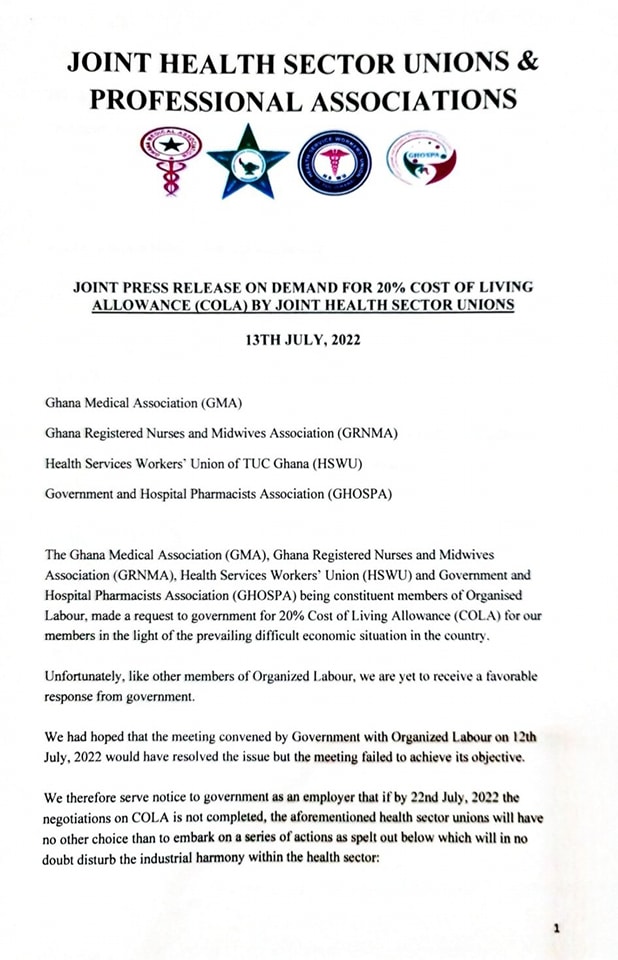 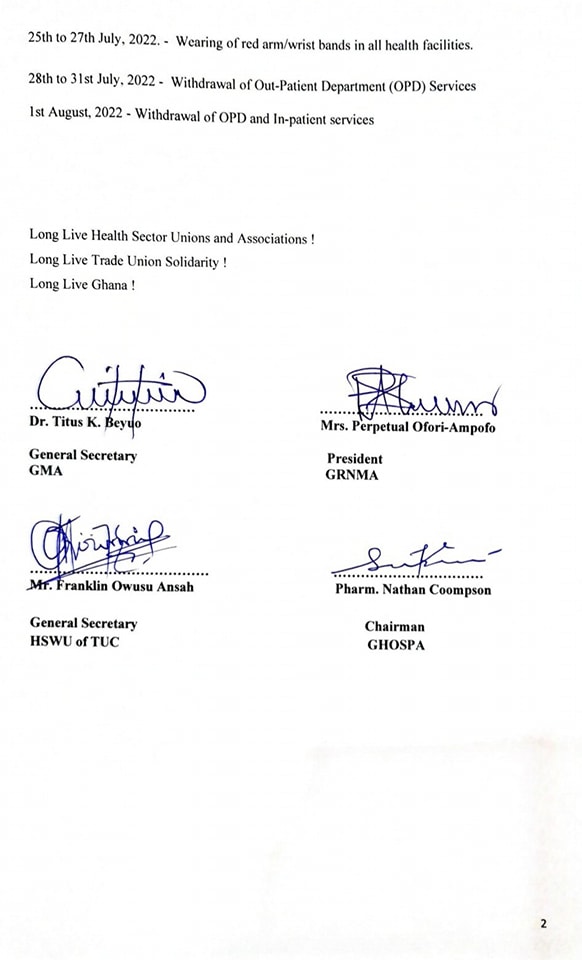 Read the entire release below;

JOINT PRESS RELEASE ON DEMAND FOR 20% COST OF LIVING ALLOWANCE (COLA) BY JOINT HEALTH SECTOR UNIONS
13TH JULY, 2022
The Ghana Medical Association (GMA), Ghana Registered Nurses and Midwives Association (GRNMA), Health Services Workers' Union (HSWU) and Government and Hospital Pharmacists Association (GHOSPA) being constituent members of Organised Labour, made a request to government for 20% Cost of Living Allowance (COLA) for our members in the light of the prevailing difficult economic situation in the country.
Unfortunately, like other members of Organized Labour, we are yet to receive a favorable response from government.
We had hoped that the meeting convened by Government with Organized Labour on 12th July, 2022 would have resolved the issue but the meeting failed to achieve its objective.
We therefore serve notice to government as an employer that if by 22nd July, 2022 the negotiations on COLA is not completed, the aforementioned health sector unions will have no other choice than to embark on a series of actions as spelt out below which will in no doubt disturb the industrial harmony within the health sector:
25th to 27th July, 2022. Wearing of red arm/wrist bands in all health facilities.
28th to 31st July, 2022- Withdrawal of Out-Patient Department (OPD) Services
1st August, 2022- Withdrawal of OPD and In-patient services
Long Live Health Sector Unions and Associations! Long Live Trade Union Solidarity!