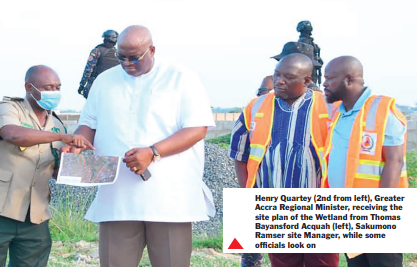 The Greater Accra Regional Minister, Henry Quartey, has indicated that structures developed on the Sakumo Ramsar Site will be demolished after a technical assessment of the level of encroachment on the site.

He gave the warning last Thursday when he led members of the REGSEC to acquaint themselves with illegal developments at the Ramsar site and inspected the level of encroachment that has taken place on the wetland, which was fast losing its international status.

The Sakumo Ramsar site, also known as the Sakumo Lagoon, is a wetland of international importance. It covers an area of 1,400 hectares (3,500 acres) and is situated along the coastal road between Accra and Tema in the Greater Accra Region of Ghana.

Speaking to journalists during the tour to assess the level of encroachment and its impact on the wetland, Mr Quartey said REGSEC would move into action to demolish all structures illegally sited, guided by expert advice from the technocrats in order to preserve the natural resource.

He added that once the structures were erected in the core area, it prevented the floodwaters from flowing freely into the sea, causing flooding along spaces beyond the Tema-Accra Motorway.

“The best we can do now is to safeguard the core area of the Sakumo Ramsar site to maintain its international status as a wetland,” Mr Acquah said.

A Technical Advisor to the Chief Executive Officer of the Forestry Commission, Rev. David Kpelle, insisted that the commission had not granted any permit to developers to build in the wetland.

However, persons who had encroached had gone to court to obtain a court injunction against the Forestry Commission to prevent the state agency from carrying out its lawful duty, a position affirmed by a former Head of Development at the TDC Development Company Ltd, William Koso.

He said Ramsar sites were very important, particularly, as habitat for migratory birds and also served as a control system for excessive floodwaters coming from uplands such as Aburi, Madina, Kpone Katamanso and beyond.

Rev. Kpelle added that wetlands were set aside not to be inhabited or developed as residential areas since such structures were susceptible to flooding.

According to him, there was still an opportunity to salvage the Ramsar site, stressing that the government should go ahead and demolish structures on watercourses, dredge the lagoon, and open up the dysfunctional sluice gates to allow for the exchange of sea water and lagoon water.

The Greater Accra Regional Minister gave the assurance that government would not relent in its effort to demolish buildings constructed on the wetland and described as ironic injunction orders secured by some of the encroachers against state agencies such as the Forestry Commission, TDCL, the Tema West Municipal Assembly and the Tema Metropolitan Assembly to prevent them from performing their mandated duty of preserving the wetland.

Mr Quartey said REGSEC had no right to regularise any documents for the encroachers, hence those harbouring such assertions must discard them, stressing that “issues of regularisation was a decision and discretion of the Ministry of Lands and Natural Resources.”