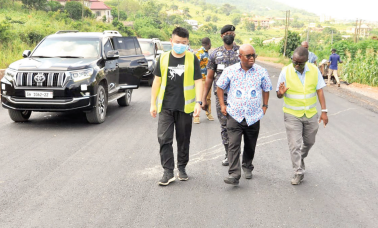 Dr Letsa (middle), flanked by Edward Annan (right) and Wang Hubiao, as they inspect a portion of the road Follow @Graphicgh

The dualisation of the Ho Main Road and Civic Centre-Sokode Gbogame project is progressing and expected to be completed on schedule at the end of year.

Already, 62 per cent of the job on the 10.2-km road has been carried out, while work on the 300-metre retaining walls on the right side of the road is ongoing.

Meanwhile, the crushed rock base on some portions of the road is taking place in earnest, while seven km of asphalt binder course has been applied on the right side of the road and 4.2 km fixed on the left side.

“The progress of work is very impressive and with the current pace, the contract deadline cannot be missed,” the Volta Regional Director of Urban Roads, Edward Annan, said.

He was briefing the Volta Regional Minister, Dr Archibald Yao Letsa, when both of them paid an unannounced visit to the project site to familiarise themselves with the progress of work last Thursday.

The urban road project took off in August 2016 but stalled in September 2017 when the contractors left the site for non-payment for work executed.

The project resumed in October 2018 with an assurance from the Minister of Roads and Highways, Mr Kwasi Amoako-Attah, that the job would be completed within 18 months, before a revised completion time of 2021.

With the expiration of the contract, the Volta Regional Directorate of the Department of Urban Roads gave the contractors an extension of up to end of 2022 to complete the job.

Mr Annan said recent rains delayed the application of asphalt on certain portions of the road but said that would not affect the progress of work.

The Chief Engineer of the contractors, Wang Hubiao, gave a similar assurance and said the job would be finished on December 31, this year.

He said there were no obstacles in the path of the project presently.

For his part, Dr Letsa described the progress of the project as highly remarkable, saying the road connected the regional capital, Ho to the Accra route and that made it a very important road.

He commended the contractors for the quality of work displayed so far and said the completion of the project would help to reap huge fortunes for the region as far as tourism, agriculture and other economic activities were concerned.