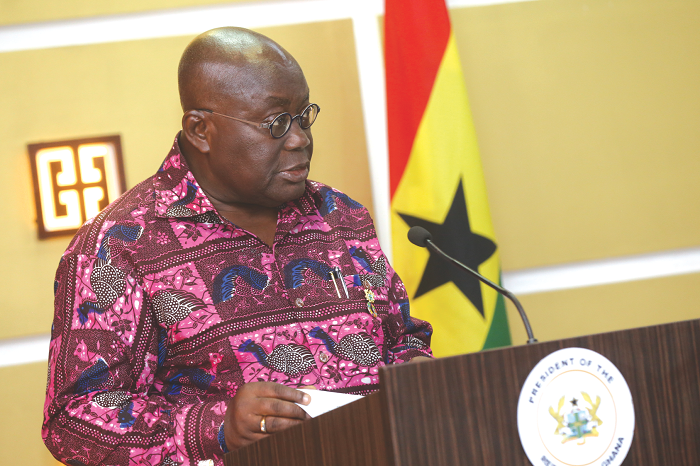 President Nana Addo Dankwa Akufo-Addo has called on the Judiciary to ensure that punishments meted out to people who engage in illegal logging and mining are deterrent enough to discourage the practice.

He further called for determined and concerted efforts on all fronts to effectively deal with the twin menace of illegal logging and mining.

The President was addressing the opening session of the second National Reduce Emissions from Deforestation and Forest Degradation (REDD+) Forum on the theme “Strengthening Law Enforcement for Effective REDD+ Implementation.”

The REDD+ spells out modalities to ensure effective implementation to reduce emissions from deforestation and degradation.

“What we make of our natural resources would be what determines our existence. I call on all gathered here, and every Ghanaian, to rise up to the occasion. Farmers and local community members should not allow illegal logging and mining to continue,” he said.

To nip in the bud illegal logging and mining, the President called on the Chief Justice and members of the Judiciary to ensure that the fines and punishments that were handed perpetrators of illegal forest activities were deterrent enough.

The President also alerted the security agencies on the roads, ports and borders not to look on unconcerned and allow illegal timber products to pass without confiscation or with corrupt purpose.

“Most importantly, the Forestry Commission should strengthen its law enforcement measures to curb illegal logging, mining and unsustainable harvesting of forest products,” he said.

The essential role of law enforcement

The President said the essential role that law enforcement played in the fight against deforestation and forest degradation was critical to the collective successes of tackling climate change.

“I want to reiterate that my government is in full support of every action that prevents forest degradation and deforestation, and also increases our forest cover. Our fight against the illegal mining phenomenon, also known as galamsey, is a case in point,” he added.

“To media houses and other civil society actors, your work on advocacy is critical to keep all of us on our toes. Do not relent in your efforts, and deepen even further your knowledge on environmental issues and their reporting,” the President added.

The Chief Justice, Ms Justice Sophia Akuffo, said the Judiciary would ensure speedy disposal of cases involving persons who were arrested and brought before the courts.

That, she said, was the surest way of deterring others who might want to endanger the future of the country through illegal logging and mining activities.

“The underlying drivers include inadequacies of some key policy arrangements, including tree tenure and land use planning, our fast-growing population and weak enforcement,” he said.

Mr Afriyie said the lack of will and tenacity in the enforcement of the numerous laws of the country had seriously undermined development efforts and called for the appropriate steps to protect the country’s heritage.

The Minister of Lands and Natural Resources, Mr John Peter Amewu, said even though there was a policy for farmers to plant trees within their farming enclaves, tree tenure was adversely affecting that policy.