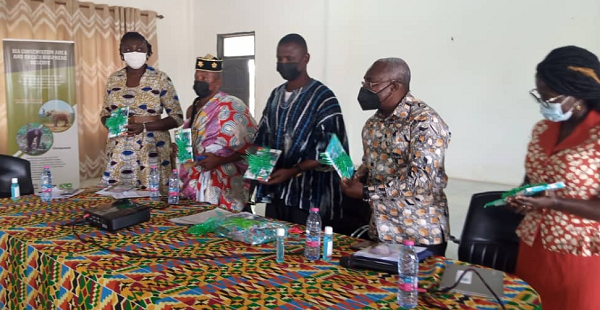 A handbook for mainstreaming ecological reserves meant for learning into national development planning has been launch with a call on all stakeholders to work towards addressing ecosystem management challenges.

Known as Biosphere Reserves, they are sites for testing interdisciplinary approaches to understanding and managing changes and interactions between social and ecological systems.

Biosphere Reserves include terrestrial, marine and coastal ecosystems which are places that provide local solutions to global challenges.

The handbook was developed and published by the Ghana Man and the Biosphere (MAB) National Committee as part of efforts to ensure mainstreaming of the biosphere reserve concept into development planning as a basis for sustainable financing of biosphere reserve activities.

It was co-funded by the UNESCO Participation Programme and the Environmental Protection Agency (EPA).

The launch of the document at Sege in the Ada West District in the Greater Accra Region last Tuesday (December 21, 2021) provided stakeholders the platform to network and establish alliances for research purposes and funding, and highlighted the role of stakeholders, particularly the youth, in management of biosphere reserves and their relevance for attaining the Sustainable Development Goals ( SDGs).

The Director-General of the National Development Planning Commission, Dr Kodjo Esseim Mensah-Abrampa, said the guidelines would serve as a tool in the development planning processes of plan preparation and implementation in Ghana.

He added that the book would facilitate the mainstreaming biosphere reserve concept in the development planning cycle and subsequent plans to be prepared.

He further indicated that if Ghana was to attain the SDGs 13 and 14, and the aspirations of the African Union Agenda 2063, such a document would play a vital role.

Dr Mensah-Abrampa tasked planning officers at the district assemblies across the country, to plan for evironmental issues by capturing biosphere reserves identified in the short, medium and long term plans to ensure effective budgeting, implementation, monitoring and reporting on the status and benefits of the biosphere reserves identified within their jurisdictions.

The Secretary-General, Ghana Commission for UNESCO, Mrs Ama Serwah Nerquaye-Tetteh, said as the United Nation began the decade (2021-2030) for the restoration of biodiversity, the application of the guidelines and biosphere reserve concepts would not only help restore the lost biodiversity but also help countries like Ghana to sustainable benefits from the ecosystem.

Giving an overview of the handbook, the Man and the Biosphere (MAB) Programme Subcommittee Chairperson, Professor Denis Aheto, said attainment of main objectives of biodiversity conservation in Ghana had not been realsed as a result of unsustainable anthropogenic activities engendered by rapid population growth and it's consequent urbanisation.

He said there was also the issue of weak implementation of biodiversity policies since they had not been mainstreamed into national development planning processes.

He explained that the purpose of the handbook was, therefore, to provide guidance for mainstreaming the biosphere concept at all levels of the development planning process, define roles and responsibilities of stakeholders particularly at the local government level.

The District Chief Executive of Ada West, Mr Sampson Tetteh Kpankpah, said Sege being the host of the second largest biosphere reserve in Ghana, the assembly was committed to implement the National Environmental Action Plan as well as the National Biodiversity Strategy and Action Plan in order to derive all the benefits necessary for effective mainstreaming.