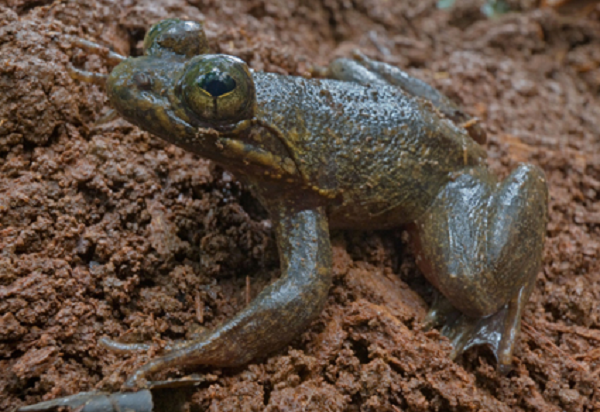 Scientists have found a critically endangered frog species that has not been found anywhere in the world in the Atewa Range Forest Reserve.

The team of scientists, which included a Ghanaian from the Council for Scientific and Industrial Research-Forestry Research Institute of Ghana (CSIR-FORIG), Dr Caleb Boateng, discovered the frog species and published it with the common name "Atewa Slippery frog."

Scientifically, the species has been named "Conraua sagyimase," after the Sagyimase community located at the foot of the Atewa Forest that has supported work on the frog.

The Deputy National Director of A Rocha Ghana, an environmental non-governmental organisation (NGO), Mr Daryl Bosu, who disclosed this to the Daily Graphic, said the Conraua sagyimase was found only in five streams in the northern part of the Atewa Range Forest Reserve.

He said the discovery was done about a year ago but the researchers had to go through scientific processes that culminated in the eventual publication this year.

The exercise was carried out by 11 scientists.

Giving specific details about the frog species, he said: "The new frog species occupies relatively pristine upland evergreen forest habitats within an elevation range of 500–750 metres above sea level. It occurs in rocky, clear, generally fast-flowing streams and waterfalls, although some individuals have also been recorded in slow-flowing streams."

Mr Bosu added that the Akan common name for the new species was “kwaeɛ mu nsutene apɔnkyerɛne”, to wit "the frog of the forest streams."

He explained that the discovery came on the back of the recent global designation of Atewa Forest as an Alliance for Zero Extinction site (AZE), a designation that meant the area was now a "no-go area" for companies and banks adhering to the International Finance Corporation (IFC)’s performance standards for project financing.

Throughout their life cycles, frogs have an important place in the food chain as both predators and prey.

As tadpoles, they eat algae, helping regulate blooms and reducing the chances of algal contamination in food.

Frogs are an important source of food for a variety of animals, including birds, fish, monkeys and snakes.

In a published paper, Dr Ofori-Boateng, said: “The name of the new species has been chosen in order to honour the people of the Sagyimase community. This small community has supported the research of scientists as well as the anti-mining campaigns during 2006–2007 and continues to do so even now."

"We hope that the naming of this endemic species will further encourage this community in their fight for an intact Atewa Range," he stressed.

Dr Ofori-Boateng observed that the discovery of the frog species once again showed the importance of the Atewa Range Forest Reserve as a critical conservation area within the Upper Guinean Biodiversity Hotspot.

Additionally, he noted that the discovery had put Ghana on the scientific map of the world and called for further support to the national and international advocacy campaign to make Atewa Range Forest a National Park in its entirety.

"More than ever before, it is evidentially clear that the Atewa Range Forest Reserve needs to be managed as a National Park to preserve its biocultural assets," he said.

The Atewa Forest Range Reserve hosts more than 10 other species of wildlife, including butterflies and other insects, frogs, spiders, plants and trees, found nowhere else in the world.

In November 2020, the International Conservation Organisation ( IUCN) called on the government to institute “urgent measures to safeguard the globally important Atewa Forest.”

Members of the IUCN voted to adopt a motion dubbed ‘Motion 103’, to that effect.

The IUCN Resolution 087 that was passed asked for global action to make Atewa Forest a National Park to secure the invaluable collection of biodiversity as well as its crucial water source for over five million Ghanaians.