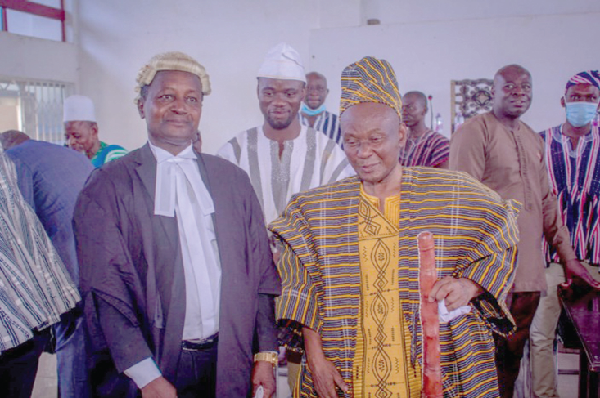 The Upper West Regional House of Chiefs has inducted Naa Professor Edmund Nminyem Delle, Chiir VIII, into the house as the Paramount Chief of the Nandom Traditional Area.

The induction of Naa Professor Edmund Delle as the substantive Paramount Chief last Tuesday, follows the enskinment of the dermatologist earlier on Monday, April 11, this year and the gazetting of the process on March 25, this year, as mandated by the Chieftaincy Act.

Known in private life as Professor Edmund Nminyem Delle, the immediate past National Chairman and Leader of the Convention People’s Party (CPP), was nominated, selected and enskinned according to the laid down customs and traditions by the elders and Kingmakers, led by the Head of the Gbullu Chiir Royal Family of Nandom, Alhaji Issifu Botug Benni.

A statement issued last Wednesday and signed by the Head of family, Chiir Benni Gyimah, said having satisfied due process, the Nadom Traditional Council facilitated the commencement of his gazetting, in accordance with laid down procedures of the Chieftaincy Act.

"The respected and revered House, after subjecting the matter through its processes, approved it and hence, Naa Professor Edmund Nminyem Delle, Chiir VIII, on March 25, 2022, was gazetted as mandated by law as the substantive Paramount Chief of the Nandom Traditional Area," it added.

The statement explained that the Nandom Traditional Council, which by law, oversaw to matters of chieftaincy and tradition, was duly informed about it.

"Hundreds of Nandome across the country travelled to Wa, the Upper West Regional capital, to witness the momentous occasion," it added.

An astute entrepreneur of all time, Naa Prof. Chiir is an investor, philanthropist, lecturer and a statesman with over 45 years in practice as a Medical Doctor specialised in dermatology.

He is the founder and owner of Rabito Clinic which has over 20 branches nationwide.