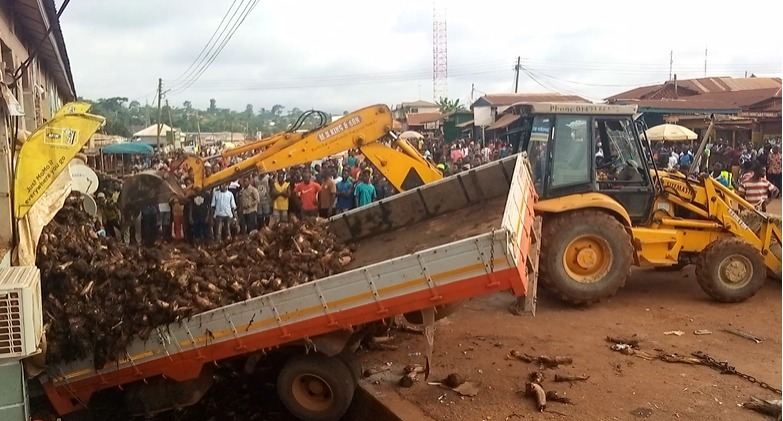 A pregnant woman and her three-year-old son met their untimely death on Tuesday, July 19, 2022, in an accident involving multiple cars.

The expectant mother was walking her son to school when a Kia Rhino with the license plate AS 9238-22 crashed them to death.

The truck plying the Sehwi Juaboso road failed brake and rammed into two private cars and a tricycle before veering into the shop.

The pregnant woman and the son were onboard the tricycle which is one the most dominant means of transportation in the area in the early hours of Tuesday.

The child died on the spot while the mother was rushed to the Juaboso Government Hospital, where she was pronounced dead on arrival at the facility.

The rider in charge of the Pragya and another who also sustained severe injuries are in critical condition at the same hospital.

The driver of the Kia Rhino however went missing as he was overwhelmed by the extent of damage caused to the lives and properties.

An eyewitness, Mr Francis Nti Nyamekye, told the Daily Graphic that he saw the Kia Rhino entering the town at top speed and started thrashing vehicles on its way.

“The vehicle continued with the speed until he got to the junction, where an SUV and tricycle were waiting to move but unfortunately the Kia Rhino ran over them resulting in injuries and the death of the pregnant woman and the son.

The police are currently investigating the incident.