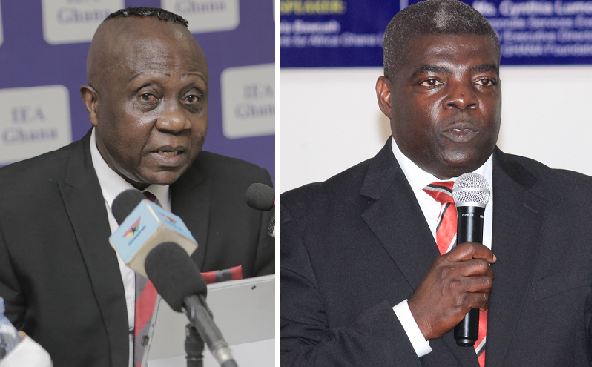 The Ghana Employers Association (GEA) and the Institute of Economic Affairs (IEA) have proposed various measures to the government to help boost revenue generation and spur growth in the economy.

The IEA has called for a strict surveillance system, backed by a strong sanctions regime, to deter and minimise the incidence of tax evasion, while the GEA wants the abolition of the Special Import Levy (SIL) introduced in 2013 to impose a two per cent levy to raise funds to stabilise the economy up to 2015.

For the GEA, the abolition of the SIL will give employers the needed respite from the current high cost of production to keep their businesses alive.

These were contained in the GEA’s 2021 Budget Inputs and the IEA’s Policy Priorities for the government ahead of the Budget Statement to be delivered in Parliament today.

The GEA’s statement, which was addressed to the Chief Director of the Ministry of Finance, said there was the need for the government to be modest in its expenditure to make the economy stable and spur growth.

It said the outbreak of the COVID-19 pandemic had created many uncertainties, financial challenges and shortfalls in aggregate demand for businesses and employers.

The pandemic, it said, derailed the economy to a path of significant decline, which necessitated the revision of the projected 2020 overall Gross Domestic Product growth from 6.8 per cent to 1.9 per cent.

Consequently, it said, many enterprises had limited their operations, with more workers facing the prospect of unemployment.

“Employers commend government's resolve to support enterprises and the economy to recover through the GH¢100 billion Ghana COVID-19 Alleviation and Revitalisation of Enterprises Support (Ghana CARES) programme,” it said.

The GEA said going forward this year and beyond, macroeconomic stability would be very essential in driving the sustainability and recovery of businesses.

The growth of the private sector, it said, significantly depended on the macroeconomic policies of the government, adding that sound macroeconomic management and economic stability did not only result in the growth and development of business but also help improve the welfare and standard of living of the people.

“Generally, we expect the 2021 Budget Statement to paint a better picture of a conducive business environment for the year under discussion. Businesses do not expect the introduction of new taxes, as experienced in the past fiscal years.

“There is the need to embark on more fiscal consolidation and expansionary monetary policy measures in 2021 for a stable and growing economy in all quarters of the year. We also expect stability in the exchange rate to prevent exchange rate losses in the books of enterprises,” it said.

The statement said one of the best legacies COVID-19 could leave Ghana with was a significantly enhanced ICT infrastructure.

That, it explained, would accelerate the digitisation of the economy; for example, in the agricultural sector, beginning with improved planting systems and extension services to the movement of farm produce from the farm gate to consumers in the urban centres.

For its part, the IEA said the low revenue was not due to low tax rates but rather the fact that the country failed to collect a lot of taxes.

The IEA said the government lost revenue in excess of GH¢5 billion through tax exemptions annually, which was characterised by considerable abuse.

It said although the government enacted a bill to streamline the exemptions, it had been languishing in Parliament since 2019, as the political will to pass the bill seemed to be lacking, ostensibly due to entrenched interests.

The IEA, therefore, urged Parliament to pass the bill with urgency to plug a big hole in the tax system.

“A significant amount of revenue is lost through tax evasion, which sometimes occur with the connivance of tax officials. We urge that a strict surveillance system, backed by a strong sanctions regime, be instituted to deter and minimise the incidence of tax evasion.

“The informal sector accounts for nearly 30 per cent of GDP, but a large part remains outside the tax net. Most of the activities are small in scale but cannot be completely ignored. We should be taxing businesses that employ at least a few people, such as mechanics, hairdressers, tailors and other artisans, while leaving out small fishes such as kayayoo, kenkey, waakye and iced water sellers, who have tiny incomes,” it said.

The statement said digitisation and other new technologies should be leveraged in the collection of informal sector taxes.

It said although property taxes constituted a potentially large pool of revenue, given the sprawling mansions in the urban areas, they were barely collected.

“We suggest that property tax collection be made the responsibility of metropolitan, municipal and district assemblies (MMDAs), which should be allowed to retain part as their internally generated funds and used at their discretion,” it said

The statement said the US Inspector General (IG) system should be adopted in ministries, departments and agencies (MDAs) to nip institutional corruption in the bud before it surfaced.

It said an independent Fiscal Council should be established to aid Parliament in scrutinising government budgets, contracts and procurements, which tended to be a major source of corruption.

The IEA also called on the government to be accommodating to advocacy by civil society organisations (CSOs) and other forms of activism against corruption.