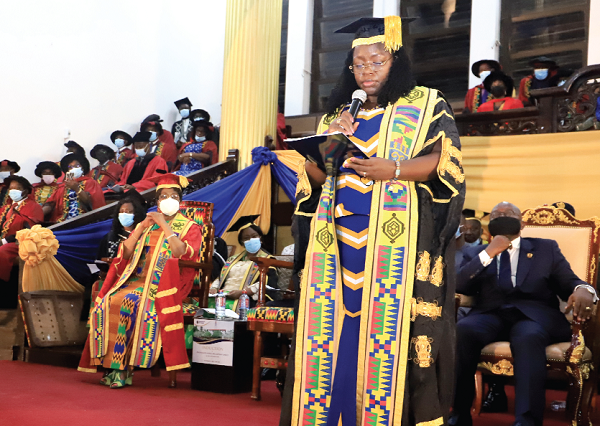 The Vice-Chancellor of the University of Ghana (UG), Professor Nana Aba Appiah Amfo, has appealed to President Nana Addo Dankwa Akufo-Addo to intervene to settle judgment debts incurred by the university.

Although she did not provide figures, she said botched agreements, leading to the debts, had resulted in financial stress on the university.

Making the appeal at her induction, the first female vice-chancellor of the country’s premier university added that the settlement of the debts would give the institution breathing space to implement various initiatives.

“Few issues which have consumed the management of the UG in recent years are financial liabilities, resulting mainly from botched agreements and judgment debts.

“Mr President, I would like to make an appeal to your government to deliver us from this rogue that hinders our growth and effort to be truly world-class. I am making a special appeal to you to support us to clear our unfortunate debts, so we can get a clean slate to start on,” she added.

Prof. Amfo, 50, a professor of Linguistics, was sworn in at a colourful ceremony at the Great Hall of the University of Ghana in Accra last Tuesday evening.

The ceremony passed as an all-female glass ceiling-breaking event, as three principal officers of the university are also females.

They are the Chancellor of the university, Mrs Mary Chinery-Hesse; the Chairperson of the University Council, Justice Sophia A. B. Akuffo, and the Registrar, Mrs Emelia Agyei-Mensah, who were all present to lend their support to the incoming V-C.

Prof. Amfo described the appointment of females to high offices in the university as a bold step which would “give true meaning to its core strategic priority of gender and diversity which ensures that merit is rewarded, irrespective of one’s gender, background, ethnicity and race”.

She spelt out her vision to include preparing students for the Fourth Industrial Revolution by embarking on the policy of one student, one laptop and appealed to the government for tax waivers to make the gadgets affordable for both faculty and students.

She said to make the university accessible to more free SHS graduates and also upscale graduate education, it would establish two additional city campuses in Kumasi and Takoradi, which would be replicated in other areas.

She also said internal stakeholders were critical for the attainment of strategic objectives, for which reason it was important to have “forward thinking academics, meticulous administrators, committed professionals and students working together to realise our objectives”.

President Akufo-Addo described the occasion as historic, saying it was the first time in the tradition of the university that almost all its principal officers were females and assured the V-C of government’s support to ensure excellence in the university.

He said broadening access to education was critical to the country’s accelerated development.

The President further expressed confidence in the leadership of the university to overcome the challenges confronting the institution, including initiating measures to ensure effective teaching and learning.