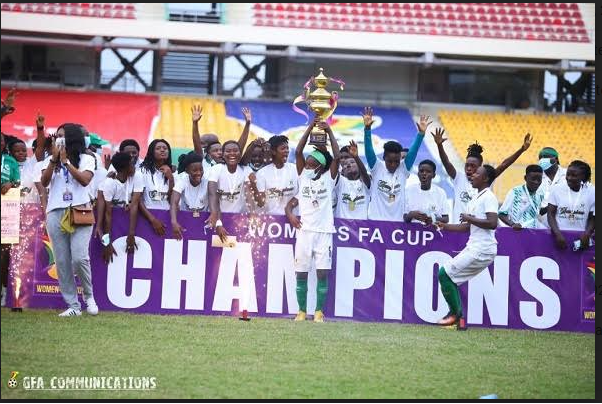 Ghana women’s football double champions, Sekondi Hasaacas Ladies will face Nigeria and Niger at the group stage as they begin their quest for a place in the maiden edition of the TotalEnergies CAF Women’s Champions League 2021.

At the draw for the West Africa Football Union (WAFU) Zone B tournament, the 2021 Ghana Women Premier League (GWPL) and FA Cup champions were drawn against Nigeria’s River Angels FC and AS Police de Niamey from Niger in Group B.

Group A will have Onze Soeur from Cote d’Ivoire, USFA of Burkina Faso and Amis du Monde FC from Togo.

Benin did not enter a representative for the competition, while Nigeria entered only one.

Hasaacas will know which team they would be playing first in the coming days as the detailed schedule for the July 18 to 30 schedule is yet to be released.

In Zone A, only four clubs – Cape Verde’s Seven Star, Senegalese champions AS Dakar Sacre Couer, Mali’s AS Mande and Determine Girls of Liberia will be competing for the slot for the main tournament in Egypt in November.

The Gambia, Mauritania, Sierra Leone, Guinea and Guinea-Bissau who make up the other members in Zone A, didn’t register a club to represent them.

Zone A’s tournament will be played at the Stade Aderito Sena in Sao Vicente with all the teams playing against each other in round-robin format to determine the winner.

The maiden edition of the CAF Women’s Champions will be held in Egypt in November, however, this will be preceded by the zonal competitions within the six zones to determine the eight teams that would qualify for the main tournament.

With eight teams to play in the finals in Egypt, two teams will qualify from the WAFU zone B, after CAF offered an extra slot to the region due to Nigeria being holders of the Africa Women's Cup of Nations.