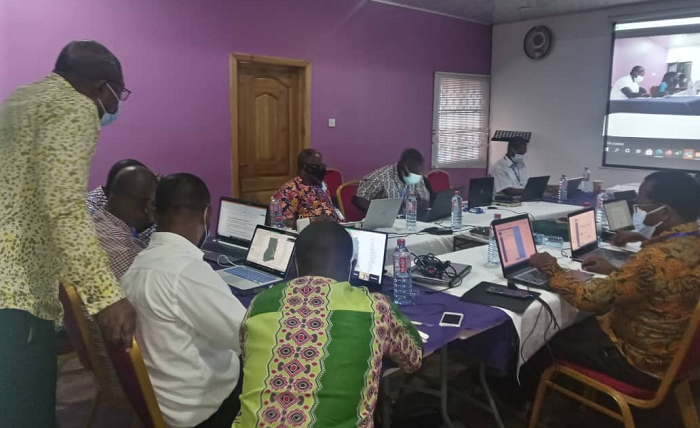 Some of the participants going through practical sessions Follow @Graphicgh

A two-day national capacity building workshop on the development of flood and drought risk maps in the Volta Basin has begun in Accra today, July 5, 2021.

The flood and drought maps, when developed, will help the country to tackle the menace of floods in a multi-dimensional perspective.

The workshop, which is under a project dubbed: “Integrating Flood and Drought Management and Early Warning for Climate Change Adaptation (VFDM) in the Volta Basin", is funded by the Adaptation Fund.

The project is being organised by the World Meteorological Organisation (WMO), a specialised agency of the United Nations, the Volta Basin Authority (ABV) and the Global Water Partnership in West Africa (GWP-WA).

Under the implementation of the VFDM project, the new flood and drought maps will be developed using new and existing data available from global (from Satellites Imagery and Geospatial Data Sources), national and local agencies as well as other projects in the region.

Speaking at the opening of the workshop, the Executive Director of the Water Resource Commission, Mr Benjamin Amponsah, said the workshop was aimed building the capacity of the relevant institutions in each of the participating countries to enable them tackle the issues of floods and droughts more effectively and efficiently.

He said since participants already had fundamental knowledge on the subjects, it was better that their capacity and knowledge be enhanced further with new tools and information.

For him, the workshop is also intended to enable the technicians to improve their understanding of the main concepts of risk assessment such as hazard, exposure and impact for floods and droughts.

The Municipal Physical Planning Officer for the Ayawaso East Municipality in the Greater Accra Region, who was also a participant in the training, Madam Jamila Salihu, said the overall objective of the national workshop was to consolidate the knowledge participants had gained during two online preparatory technical workshops on floods exposure and drought hazard and impact.

Similarly, she added, the national workshop will help prepare new information about stock for floods and drought hazard, as well as to produce flood exposure maps, according to the scenario-based approach.

The Principal Monitoring Officer of the Water Resource Commission, Mr Eric Muala, said the workshop was aimed at bringing the technicians to take ownership of the methodological approach for the evaluation of hazard and probability of impact of droughts, adding that the project activities started in June 2019.