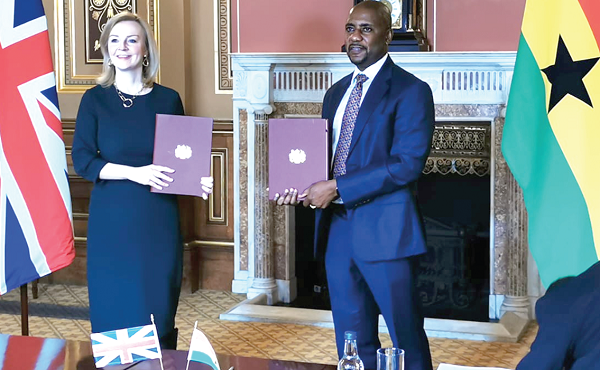 The government has signed an interim Trade Partnership Agreement (TPA) with the United Kingdom (UK) to sustain trade relations between the two countries as Britain and Northern Ireland exit the European Union (EU).

The agreement, which allows up to £1.2 billion worth of trade between the two sides, replaces the interim Ghana-EU Economic Partnership Agreement (EPA), which governed trade relations between Ghana, but ceased to apply to the UK on December 31, 2020.

The new trade framework provides duty-free-quota access for Ghanaian exports to the UK market and enhances the competitiveness of local industries. It would also improve the business environment in Ghana through development cooperation between the two countries.

Negotiations between the technical teams of both nations for the new trade framework started in March 2018, with the two countries arriving at a consensus on the fundamental elements of the new agreement.

The Minister designate for Trade and Industry, Mr Alan Kyerematen, witnessed the signing ceremony via Zoom.

The deal is expected to facilitate multiple economic transactions in a tariff-free package, covering bananas, canned tuna, cocoa and other such related commodities.

The reciprocal partnership will also see the UK benefiting from tax liberation from 2023 when it can export machinery, chemical products and other electronics to Ghana.

Mr Kyerematen said the new agreement reaffirmed the deep interest of both Ghana and the UK to strengthen their long-standing trade and economic relationship, as it establishes a new framework for Ghana-UK for sustained economic growth in the country.

The minister designate expressed the hope that the new agreement would build the foundation for the negotiation of a free trade agreement between the UK and ECOWAS to promote regional integration, economic cooperation and good governance in the sub-region and also increase intra-regional trade.

“I believe the new agreement will further support the economic and sustainable development agenda of Ghana by enhancing the country’s export potential and diversification,” he added.

Mr Kyerematen further expressed the belief that the agreement would complement priority policies and projects of the government, particularly its industrial transformation agenda, and a national export development strategy which he said were designed to boost industrial production and enhance export development.

The minister designate thanked the UK government for actively supporting Ghana’s programme to develop strategic anchor industries to build economic pillars of growth by diversifying the economy beyond cocoa and gold.

“I will like to make special mention of the support we have received from the UK government in the development of the automotive industry as well as the garment and pharmaceutical industries,” Mr Kyerematen said.

He also commended Ms Truss for her constructive engagement and the flexibility she had shown in the negotiations which made it possible to arrive at the desirable outcome “we celebrate today with the signing of the new Interim Ghana-UK Trade Partnership Agreement”.

“We have just signed a trade deal with Ghana, building on a trade relationship worth £1.2 billion,” Ms Truss posted on her Twitter handle shortly after the signing.

She said the agreement secured certainty for business to support jobs in both nations and also set the stage for closer trading ties in the years to come.