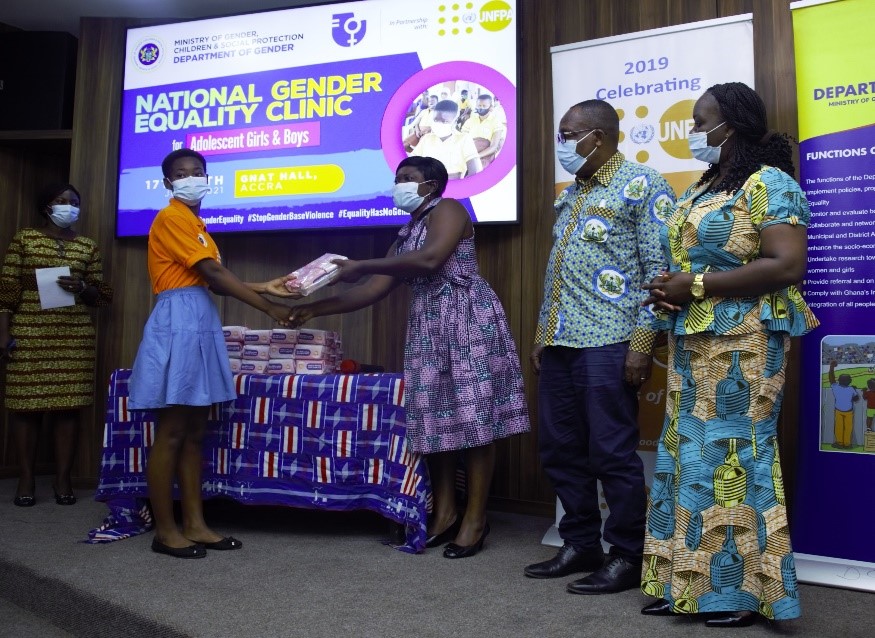 Recently, some adolescents had the opportunity to discuss the concept of ‘gender, gender roles, equality and stereotypes’ at a programme held by the Department of Gender and the United Nations Population Fund (UNFPA) in Accra.

The participants, aged 12 to 19 years, easily identified roles which society had ascribed to a particular gender, ranging from house chores and professions and indicated that currently some of these roles are performed by both sexes.

A male participant said ‘I am the eldest child. I help my mother in the kitchen although I am a boy’.

They also acknowledged that women were now going into male dominated professions such as medicine, engineering, carpentry and gave instances where they have experienced or witnessed such a change.

However, they observed that there were still some negative stereotypes associated with certain roles when performed by the opposite sex and agreed that both genders can learn and practice any profession of their choice and can be anything they want to be.

The adolescents were participating in a ‘Gender Equality and Adolescent Sexual and Reproductive Health Clinic’ to re-orient and educate 70 girls and 30 boys aged 15 to 19 years selected from all the regions of the country, on gender equality.

They also discussed issues of adolescent sexual and reproductive health and rights to enable them make informed choices in the face of the alarming adolescent pregnancy rates.

The overall objective of the three-day Gender Clinic was to mentor the adolescents on issues of gender equality, sexual and gender-based violence, adolescent sexual and reproductive health rights and provide them with information on life skills including career development.

Gender equality is where men and women have equal power and opportunities for financial independence, education, and personal development. It does not mean that women and men have to become the same, but that their rights, responsibilities and opportunities will not depend on whether they are born male or female.

Although the world is making progress in achieving gender parity, many girls also face systemic barriers that can negatively impact their personal growth and development including, poverty, adolescent pregnancy and child marriage.

In Ghana, evidence has shown that girls are particularly susceptible to challenges related to their physical and mental health, body image and self-esteem.

Women's empowerment is a critical aspect of achieving gender equality. It includes increasing a woman's self-worth, decision-making power, access to opportunities and resources, power and control over her own life inside and outside the home, and her ability to effect change.

Women and young girls face structural discrimination due to the patriarchal nature of most societies. Unleashing the potential of girls and young women is an effective pathway to addressing poverty, improving access to education and healthcare and making societies more inclusive and reducing violence in communities.

Many attest to the potential for growth and prosperity that can be achieved when women are empowered.

Adolescence is a turning point for girls. It is a time of transition when girls begin to question and form their own individual identities.

The transition period from childhood to adulthood can be confusing and challenging for adolescents as they form their self-esteem, identity, sexuality, mental and physical health and become susceptible to misinformation and violence.

Therefore, it is crucial that gender equality education begins early to conscientise them about the importance of their wellbeing, inculcate respect for both sexes and disband any negative stereotypes.

To sustainable progress on combatting gender discrimination it is important to include men and boys in the conversations so that they can challenge negative masculinities and help create an enabling environment for gender equality.

Welcoming the youth to the Gender Equality Clinic, the Head of the Department of Gender of the Ministry of Gender, Children and Social Protection, Ms Faustina Acheampong said that the clinic formed part of government’s effort to attain the Sustainable Development Goal (SDG) 5, which seeks to “achieve gender equality and empower all women and girls.”

She stated that women and girls make up more half of the worlds’ population but are regularly discriminated against, adding that it was necessary for society to acknowledge that the potential of growth and prosperity can be achieved when women and girls are empowered and accorded equally opportunities like men and boys.

Ms Selina Owusu of the UNFPA reiterated that all persons have the right to live a dignified life and when women are living safe, fulfilled lives, they can reach their full potentials and contribute their skills to the workforce and raise healthy families and fuel sustainable economies.

“A key part to empowering women and girls through education and mentorship is that assertive girls can pursue education, work and contribute meaningfully to the economy. They are less likely to become child brides or victims of SGBV. Developing the agency of girls is an effective way of addressing gender inequality, improve access to general healthcare and wellbeing,” she stated.

Ms Owusu presented sanitary pads to the girls on behalf of UNFPA to support them to stay in school.

Taking his turn, Mr. Mawutor Ablor of the Gender Ministry noted that culture and social norms play a significant role in how people perceive women's role in society and this has affected the pace at which societies achieve development.

It is for this reason that men and boys are being engaged as partners to promote gender equality as well as religious leaders, traditional leaders, out of school adolescents, parents/guardians, community members and advocacy network groups.