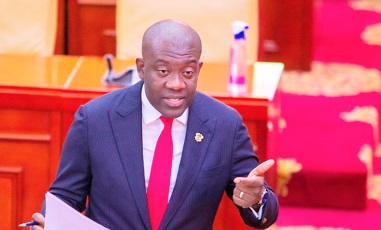 Kojo Oppong Nkrumah, Minister of Information, on the floor of Parliament Follow @Graphicgh

The minister said most applications since the implementation of the Right to Information Act, 2019, (Act 989) focused on matters bordering on the economy, public safety, social services, infrastructure, energy, trade, ministries, departments and agencies.

Mr Oppong Nkrumah explained that the requests consisted of 85 requests for information by individuals and institutions to 32 by public institutions in 2020.

“My office is still making all efforts to receive detailed information from some public institutions on 15 (18 per cent) of these submissions to determine the number of applications from individuals and institutions,” Mr Oppong Nkrumah said on the floor of Parliament yesterday.

For 2021, he said, 129 requests for information were submitted by individuals and institutions as of the end of December that year.

Out of the 129 applications received, he said 87 were received from individuals, with 42 coming from institutions.

Mr Oppong Nkrumah said 10 requests, made up of five each, were submitted by individuals and institutions as of the end of January 2022.

The information minister added that his office was yet to present the annual report for 2021 in Parliament this year.

“I must emphasise that these are provisional figures. The final figures will be contained in the annual report that will be presented to Parliament in June 2022,” he said.”

The minister gave the information when he answered questions from the Member of Parliament for Dormaa East, Paul Apreku Twum-Barimah on the floor of Parliament, on the progress of the implementation of the law since its inception.

The RTI Act was passed in 2020 to operationalise Article 21 (1) (f) of the 1992 Constitution, which stipulates that “all persons shall have the right to information, subject to such qualifications and laws as are necessary in a democratic society”.

The law gives people the right to access all sorts of information, apart from exempt information.

The minister also told the House that an overwhelming majority of applications were granted by the institutions that received them.

Mr Oppong Nkrumah said in 2020, 72 applications were granted, six requests were rejected, three were transferred, three referred and one deferred.

For 2021, he said 95 applications were granted, seven rejected, six transferred and 17 referred, two were deferred and two reviewed.

“In 2022, out of the 10 that have been received eight have been granted, one rejected and one referred to the appropriate ministry, department or agency,” he said.

On the question of what fees and charges regime was being applied since the approval of the RTI Act, Mr Nkrumah said the House was yet to approve charges schedule that would inform fees and charges for applications.

For that reason, he said the majority of requests that were granted were done on gratis basis and that those that were asked to pay money were charged mostly between GH¢1 and GH¢2 per page for the production of the pages.

“There were instances where high figures were suggested by the institutions applicants appealed to the RTI Commission which gave the appropriate orders for the institutions to review the fees being charged downwards”.

Mr Oppong Nkrumah charged the academic fraternity, as well as media practitioners to utilise the law to help them obtain credible and factual information from state institutions.

He said the law fostered a culture of transparency and accountability in public affairs and as such, both media practitioners and persons in academia should utilise it to access credible information with which they could use in their dissertations and media work.