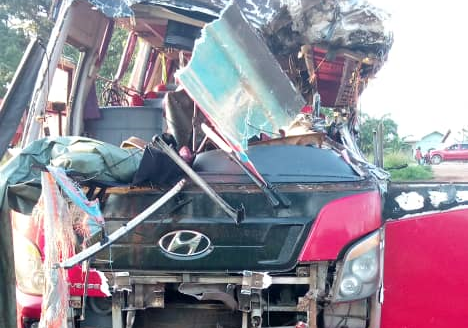 The Wa-bound passenger bus involved in the accident

Thirteen persons died on the spot and 10 others were seriously injured last Sunday night when a DAF XF truck crashed into an OA passenger bus at Ohene-Nkwanta on the Kumasi-Konongo highway.

The casualties, made up of nine males and four females, were on the OA bus with registration number GT-5597-19 heading towards Wa from Accra.

The truck, with registration number AC-179-21 and loaded with bags of pepper, was heading in the opposite direction towards Accra when the head-on collision happened.

The bodies have since been deposited at the mortuary of the Stewards Hospital at Yaw Kwei awaiting identification and collection.

The injured were sent to the Konongo Odumase Government Hospital for treatment.

The accident is said to have occurred around 10:50 p.m. in a sharp curve.

The head of the Ashanti Regional Command of the Motor Traffic and Transport Department, Superintendent Emmanuel Adu-Boahen, confirmed the accident to the Daily Graphic.

He explained that the DAF truck, being driven by one Bayiblisi Madewe, aged 38, was travelling from Kumasi towards Accra.

He said the DAF truck ran into the rear portion of a MAN Diesel truck with registration number GW-3569-13, which was being driven by one Iddrisu Seidu.

He said the impact threw the DAF truck off its track, causing it to veer into the path of oncoming vehicles and subsequently crashed into the side of the OA bus.

He said the accident vehicles were later cleared from the road to pave the way for smooth traffic.

He appealed to motorists and other road users to exercise maximum caution on the road to minimise the impact of any eventuality.