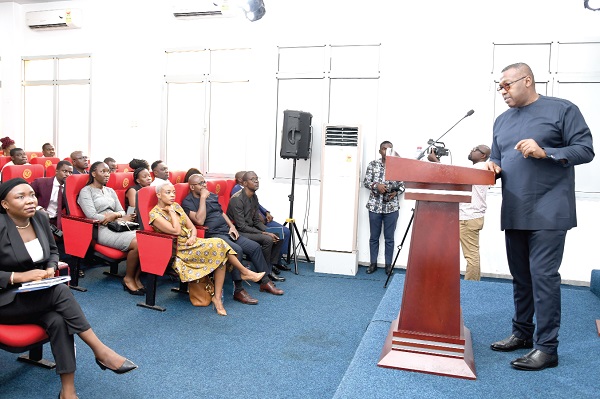 The Ghana Gas Company Limited (Ghana Gas) has said it saves the nation about $3m every month through the indigenisation of its operations.

It said the company started making savings after replacing Chinese expatriate engineers and technicians with their Ghanaian counterparts at the Atuabo Gas Processing Plant in the Western Region and other pipelines between 2017 and 2022.

It said in line with that development, it had intensified the training of its engineers and technicians to enable them to run the facilities efficiently to sustain the gains made over the years.

The Chief Executive Officer (CEO) of Ghana Gas, Dr Ben Asante, who made this known at the State of the Agencies series organised by the Ministry of Information in Accra yesterday, added that the monthly savings had enabled the company to build solid intellectual capital to sustain the growth of the industry.

He said Ghana Gas, after its incorporation in July 2011, went through a period of infrastructure construction and officially commenced operations with Chinese engineers.

“Between 2011 and the end of 2016, the Chinese were managing our gas processing plants and pipelines. Since 2017, indigenous Ghanaian engineers and technicians have taken over the operations of the plant.

“Six years after the exit of the expatriates, we have built solid intellectual capital and done three successful maintenance shutdowns,” he said.

According to Dr Asante, the company’s vision and success story were anchored on three pillars — business, personnel training and community development.

He said the company also provided effective and efficient operations and maintenance protocol that were compliant with health, safety, security and environmental standards.

“We are looking at building and enhancing indigenous intellectual capacity for the sustainability of the industry,” he added.

The CEO further said Ghana Gas had successfully produced and supplied lean gas to prevent power outages in the country.

“In the not-too-distant past, the country experienced power outages and the key reason was that we did not have the fuel to be able to generate power.

“We were not able to pay our bills and so Nigeria, for instance, refused to supply and that increased the power outages. But with the advent of Ghana Gas and the reliable supply of gas, that menace of ‘dumsor’ is gone,” he said.

Dr Asante also said the use of natural gas to generate power had reduced the generation cost, saved the country some foreign exchange and also protected the environment.

The CEO also said Ghana Gas had initiated some corporate social responsibility (CSR) projects across the 16 regions of the country since 2019.

He said 152 of the projects, covering health, education, water and sanitation, roads, sports and security, had been completed, while 301 others were ongoing.