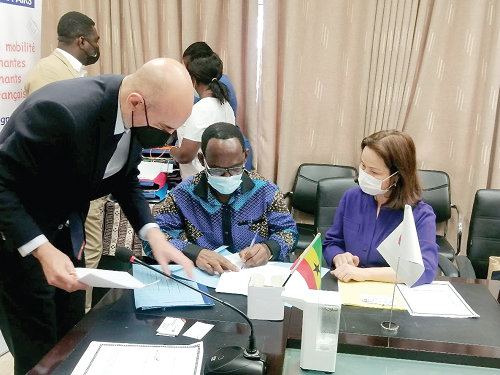 Mr Benjamin Gyasi (middle), Chief Director of the Ministry of Education, signing the agreement for Ghana, while other dignitaries look on

Ghana and the International Organisation of Francophone (OIF), have signed a three-year framework cooperation agreement on a teacher mobility project (2021-2024).

The context of the agreement is anchored on the implementation of a Linguistic Pact signed with the organisation in 2018 on building the capacity of the Ghanaian French teachers.

The Chief Director at the Ministry of Education, Mr Benjamin Gyasi, and the Head of OIF, Mrs Thi Hoang Mai Tran, signed for their respective institutions.

The OIF is an organisation that covers 88 members of states and governments that use the French language as a common medium of communication to promote peace, good governance, respect for the culture and linguistic diversity to achieve sustainable development goals.

Ghana and its people share those values and have, therefore, joined in 2006 and signed the Linguistic Pact with the organisation in 2018, culminating in the adoption of an action plan in 2019.

The action plan borders on four thematic areas: Education (strengthening the place of French in the education system), Francophone environment (creating an environment and facilitating access to Francophone productions and materials for the populace).

The rest are linguistic development (strengthening the place of French in public and administrative life to move towards regional integration), and language policy (language policy reforms in relation to language teaching).

A Deputy Minister of Education, Rev. John Ntim Fordjour, said the Ministry of Education was fully committed to the promotion of teaching and learning of French and its usage in the country by progressively transforming the Ghanaian space into a francophone environment.

Rev. Fordjour explained that the 21 experts would be deployed to three institutions where their service would be needed most.

Additionally, Rev. Fordjour said others would be sent to the Regional Centres for the Teaching of French (CREF) in charge of the continuing training of in-service French teachers in the 10 traditional regions in the country, while the rest would be sent to the Bilingual Schools system where, as early as Lower Primary One pupils, were being introduced to the study of mathematics, science and information and communication technology in French.

The French Ambassador to Ghana, Anne Sophie, for her part, indicated that with the strategic location of Ghana in the West African sub-region, learning French by Ghanaians would go a long way to promote the socio-economic development of the country.