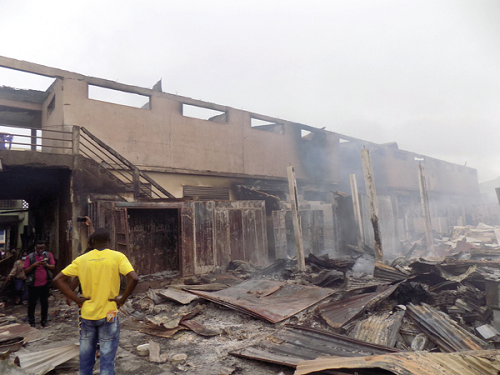 The situation at the Oda Central Market after the fire disaster. Picture: SAMUEL KYEI-BOATENG Follow @Graphicgh

Property and goods of more than 1,000 traders have been destroyed in a fire that gutted the Akyem Oda Central Market last Monday night.

Most of the stalls and stores, including a storey building, were burnt to ashes but no casualties were recorded.

It took personnel of the Ghana National Fire Service from five districts and five fire engines, assisted by a detachment of the military from the Jungle Warfare School at Achiase and the National Disaster Management Organisation (NADMO), to bring the fire under control after eight hours.

The immediate cause of the fire is not yet known.

The market is one of the biggest in the Eastern Region, and the magnitude of the disaster is the second in 18 years at the place, with a similar case recorded on September 13, 2003.

Officials said the structure would be demolished and reconstructed given the damage caused by the fire.

The Member of Parliament (MP) for Oda, Mr Alexander Akwasi Acquah; the Chief Executive of the Birim Central Municipal Assembly, Ms Victoria Adu, and the Krontihene of Akyem Kotoku Traditional Area, Obrempong Gyamfi Saforo Kyereh, have since inspected the extent of damage and sympathised with the victims of the disaster.

Mr Akwasi Acquah yesterday expressed concern that the fire disaster had compounded a difficult situation as officials were yet to rehabilitate people rendered homeless at Oda after a rainstorm destroyed their buildings in April this year.

He appealed to the government, non-governmental organisations and individuals to support the disaster victims with cash and logistics to help restore their livelihoods.

Obrempong Kyereh appealed to the banks to grant soft loans to the traders who had lost their capital in the fire to enable them to return to business.

He further urged the government to help in rebuilding the damaged market, saying it was the only source of employment for the traders.

The Eastern Regional Chief Fire Officer, Ms Jennifer Naa Yarley Quaye, expressed concern about the lack of access to the market, saying all the routes had been blocked by the traders and that it impeded their effort in some way.

She said her outfit would train fire wardens to educate the traders on the prevention of fire disasters.

She advised the people to take fire safety measures seriously in every aspect of their lives.