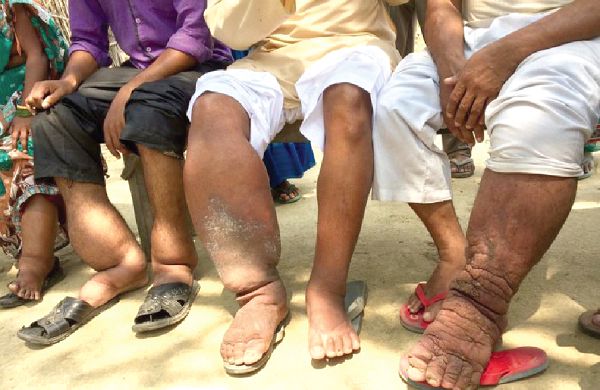 The battle of elephantiasis is being won Follow @Graphicgh

Elephantiasis infection in 38 endemic districts out of 98 in the country has been brought to an end.

This comes after 16 years of battling the disease.

This current situation has empowered the Ghana Health Service (GHS) and its partners to push backwards the target date for the elimination of the disease in the remaining 15 districts from 2020 to 2025 to allow for more time to completely get rid of the disease.

The 15 districts that still have the disease are Nabdam and Kasena Nankana West in the Upper East Region; Lawra, Jirapa, Wa West and Wa East in the Upper West Region; Bole, Sawla-Tuna-Kalba, West Gonja and North Gonja in the erstwhile Northern Region; Ahanta West, Nzema East and Ellembelle in the Western Region, and Sunyani Municipal and Sunyani West in the Bono Region.

These were disclosed at the launch of the 2019 Mass Drug Administration (MDA) exercise against neglected tropical diseases (NTDs) in Sunyani last Tuesday.

The theme for this year’s exercise is: “Improving Mass Drug Administration in all endemic districts”.

The Chairman of the Governing Council of the GHS, Dr Yao Yeboah, said while lack of awareness, unsafe health practices, close contact with infectious vectors and limited access to safe water and sanitation continued to present challenges, the Ghana NTD Programme had made good progress, particularly against trachoma and elephantiasis.

He urged all stakeholders to marshall their knowledge and efforts to help eliminate elephantiasis in the remaining 15 hotspot districts in the country.

In an address read on his behalf, the Bono Regional Director of Health Services, Dr Kofi Issah, who is also responsible for the Bono East and Ahafo regions, said even though the World Health Organisation (WHO) had slated the year 2020 as the end period for elimination of elephantiasis, the same could not be said of Ghana.

He has, therefore, called for more rounds of treatment in the hotspot districts to be conducted and has also appealed for intense collaboration among health institutions, agencies and stakeholders to find out why the disease has still not been eliminated in the remaining 15 districts.

Dr Issah commended communities who continuously allowed for drugs to be distributed to them.

“Without such free-spirited nature, elimination of NTDs will be a mirage,” he said.

The Neglected Tropical Diseases Programme Manager, Dr Benjamin Kofi Marfo, said weak monitoring and supervision and lack of security for healthcare volunteers during field visits, as well as cross-border issues were some of the challenges thwarting efforts to fight NTDs.

To make the exercise more successful, he called on the police to provide protection for community drug distribution volunteers and also for monitoring and supervision roles in remote areas especially to be strengthened.

Dr Marfo said research had revealed that 25 per cent of people only collected the drugs and did not take them and asked people who behaved as such to stop doing so in order for the programme to achieve the expected results.

He also asked people who had symptoms of NTDs not to treat themselves with traditional medicines but report to the nearest health facility for proper diagnosis of their problem before it got out of hand.