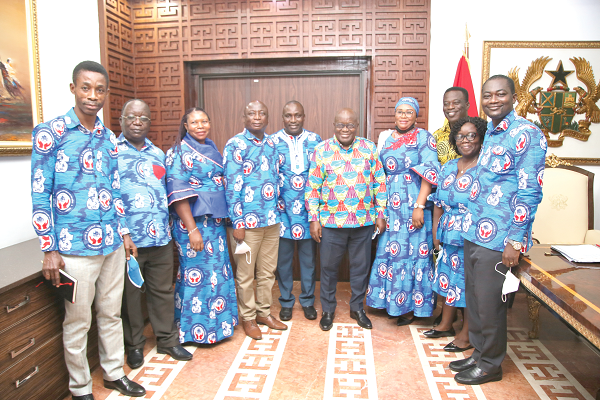 • President Akufo-Addo with Mr Ignatius Baffour Awuah, Minister of Employment and Labour Relations, and the executive of CUA at the Jubilee House.

The Ghana Co-operative Credit Unions Association (CUA) has appealed to the government to facilitate the release of its locked-up funds that were deposited with defunct financial institutions in the country.

According to the association, over GH¢130 million was still locked up with 21 defunct financial institutions, while over GH¢50 million was also with 10 existing institutions as of June 28, 2021.

The association said the situation had led to severe liquidity challenges burdening its operations and those of other credit unions in the country.

The Chairman of the association, Dr Bernard B. B. Bingab, made the appeal when the leadership of CUA, accompanied by the Minister of Employment and Labour Relations, Mr Ignatius Baffour Awuah, paid a courtesy call on the President, Nana Addo Dankwa Akufo-Addo, at the Jubilee House in Accra.

Other members of the delegation were the acting Registrar of Co-operatives, Mr Yaw Offe, and the acting General Manager of CUA, Ms Lydia D. Kisseih.

A statement issued by the union in Accra yesterday said Dr Bingab further said the COVID-19 pandemic had affected activities of the association through high levels of withdrawals, high loan delinquencies, cash flow, high operational costs and job losses, for which it entreated the government to include the association in the intervention programme by the Ghana Enterprises Agency (GEA) to alleviate the plight of members.

He also expressed concern that since the passage of L.I. 2225 in 2015, it had not been operationalised, and recommended a roundtable with the ministries of Finance and Employment and Labour Relations and the Bank of Ghana (BoG) to fashion out the best way to regulate the activities of credit unions in the country, as was done in countries such as The Gambia and Kenya.

Dr Bingab expressed the appreciation of the union to the government for the introduction of initiatives for job creation and poverty alleviation through financial inclusion, while thanking the President and the sector minister for their commitment to the advancement of co-operative credit unions in the country.

He also congratulated the President on his re-election and facilitating a $3.5-million grant for CUA to acquire a core banking system for the enhancement of its operations.

He said talks were still continuing for further engagement with the Ministry of Finance and the World Bank for the smooth implementation of the banking system.

President  Akufo Addo acknowledged the concerns of the association and, accordingly, directed the sector minister to facilitate the process for the resolution of the challenges.

He called for a roundtable among the BoG, the Department of Co-operatives and CUA to discuss the issue of regulation, which he said was key to effective governance and development.

On the issue of locked-up funds, the President directed his Executive Secretary to liaise with the receiver of the collapsed financial institutions and the regulator (the Securities and Exchange Commission) to address the issue of the payment of the funds.

He also welcomed the request by the association to be included in the COVID-19 alleviation programme through the GEA and referred same to the sector minister to facilitate the process.

The President thanked the leadership of the association for the healthy engagement and said such meetings were significant for nation-building.

He also commended them for their hard work and contribution to the welfare of members and the growth of the country.

Established in 1968 under the Co-operative Societies Act, 1968 (NLCD 252) of the Department of Co-operatives of the Ministry of Employment and Labour Relations, CUA is the apex body of co-operative credit unions, with 11 chapter offices in the country.

It is a member of the Ghana Microfinance Institutions Network (GHAMFIN) and affiliated to the Ghana Co-operative Council (GCC).

It is also a member of the African Confederation of Co-operative Savings and Credit Association (ACCOSCA) and the World Council of Credit Unions (WOCCU).

Among its key activities are ensuring greater prudence in the management of loans granted by credit unions, providing guidelines for investment activities of credit unions, ensuring effective corporate governance systems, while safeguarding the cooperative principles of volunteerism, democracy and transparency.

Its collective assets are currently estimated about GH¢2.2 billion, with a membership of more than 850,000 in 551 credit unions.