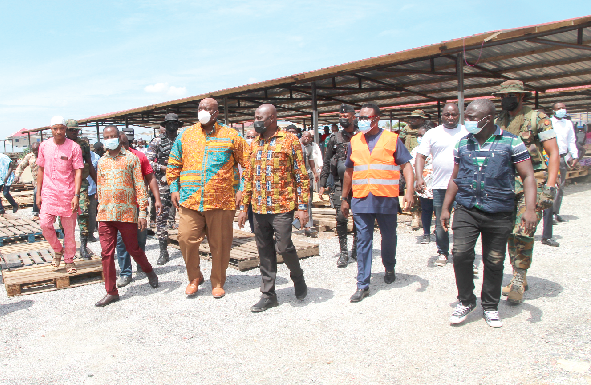 The government has given assurance of its resolve to hasten the development process at Adjen Kotoku in the Ga West municipality in the Greater Accra Region to create a harmonious environment for both relocated traders and inhabitants of the area.

In line with that objective, it is to provide 1,000 cement blocks,100 bags of cement and 50 streetlights for the Ga West Municipal Assembly (GWMA) by Friday.

The Minister of Local Government and Rural Development, Mr Dan Botwe, said this during an inspection tour of the Adjen Kotoku and the Agbogbloshie markets with the Greater Accra Regional Coordinating Council (GARCC) to ascertain the situation at those markets.

The delegation also engaged with the leadership of scrap dealers and onion sellers to know their concerns, which included the expansion of a mosque, the provision of water and toilet facilities, as well as the establishment of banking outlets, at Adjen Kotoku.

“Not many people are on government payroll; some are in the private sector and the onus lies on the government to create a conducive atmosphere for them to operate.

“So we can’t harm your business; we will rather support you and ensure that you live in a harmonious environment to do your work,” Mr Botwe told the traders.

He said the government had followed the relocation process closely, was aware of the concerns the traders had raised and would engage all stakeholders to ensure that those challenges were addressed.

The Greater Accra Regional Minister, Mr Henry Quartey, commended the traders for collaborating with the government to ensure a successful relocation exercise.

He reiterated the fact that the government would continue to assist them to settle comfortably at the new market, and urged them to liaise with the assembly for a speedy resolution of their challenges.

“We are not leaving you here; we will come here periodically to check on the development so far and we will make sure that we create a harmonious environment for you and residents of the area,” Mr Quartey added.

Meanwhile, business is picking up steadily at the Adjen Kotoku Market, five days after onion traders and other businesses began occupying spaces at the facility.

The traders, in their hundreds, have occupied various sections allocated to them at the market, while others have also taken charge of the open spaces on the eight-acre land provided them.

The development has brought a major boost to businesses in the area, particularly commercial bus operators, who were seen busily conveying traders from their various destinations.

Tricycle and motorcycle (okada) riders were also seen dropping off retailers who had come to purchase goods.

In spite of the busy commercial activities in the area, there was sanity, with plans put in place to control waste by the municipal assembly, which had provided dust bins at various vantage points at the market.

The traders, who had earlier resisted the relocation exercise, commended the government for embarking on such a move and also assisting them to transport their goods to the new site.

According to them, their earlier rejection of the idea was as a result of misconceptions they had gathered from some people about the new site.