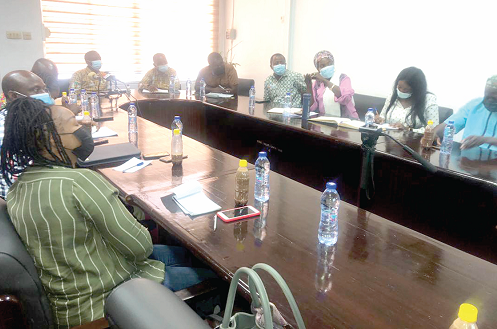 Dr Francis Padi (arrowed) addressing the media after the tour

The Cocoa Research Institute of Ghana (CRIG) has urged the government to establish shea butter processing plants as part of the One district, One factory (1D1F) initiative to help alleviate rural poverty in the country.

It said shea butter had become popular across Africa and the Western world due to its widespread use by many companies in the production of lotions, shampoos, cosmetics, conditioners as well as other beverage products.

“Because of these various end-user products that can be developed from the crop, it has a huge potential to alleviate poverty, particularly in the Savanna part of the country where the crop is mostly cultivated. We must, therefore, give it much attention just as we do for cocoa,” the acting Executive Director of the institute, Dr Francis Padi, said.

He said this when organisers of the World Shea Expo paid a familiarisation tour of the institute yesterday to learn about a new research into shea production.

Dr Padi said cocoa had gained ground in the country mainly because much focus was given to the quality of the end products.

For that reason, he said equal attention must be paid to ensuring quality standards for shea to help drive people to establish plantations.

“If producers know that shea butter in Ghana has the highest standard of vitamin A, they will be willing to pay a premium price for them and that will help develop the shea sector of the county,” Dr Padi added.

He said the institute had developed technology and techniques that could enable a farmer grow shea and harvest it within four years rather than the usual six years.

Additionally, the executive director said it had developed several end products of shea, comprising body lotion, beverages and varieties of soap, among others, and was ready to share the recipe with entrepreneurs who were ready to venture into shea production.

The products developed at the institute, according to him, had high a market value which could be harnessed for large-scale production, promotion and distribution through private sector partnerships.

The Chief Executive Officer (CEO) of Savannah Golden Tree Limited, organisers of the shea expo, Mr Rashid Zakaria, said the government through the establishment of shea processing plants would also add value to shea nuts for local consumption and for export.

“People don’t like the idea of planting the shea tree because of its long gestation period and as a result of that, the country mostly depends on wild shea trees but now that CRIG has developed technology and techniques that can enable a farmer to grow shea and harvest it within four years; investors will be encouraged to establish plantations as we have in cocoa,” he added.