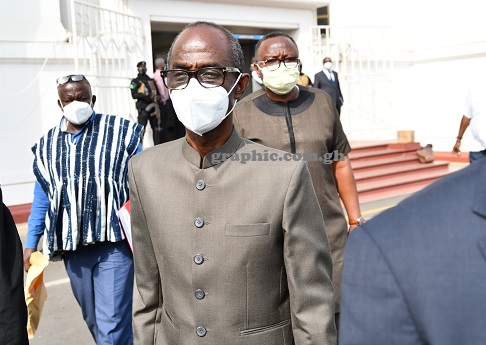 The General Secretary of the National Democratic Congress (NDC), Mr Johnson Asiedu Nketia, yesterday told the Supreme Court that he never implied that the presidential candidate of the party in the 2020 elections, former President John Dramani Mahama, won the presidential election.

Mr Asiedu Nketia had allegedly said in a video that was shown in open court yesterday that the NDC’s collation of the results of the election at the time indicated that former President Mahama was ahead, and that the party expected the EC to declare Mr Mahama President-elect.

It was with that portion of the video that counsel for President Nana Addo Dankwa Akufo-Addo (second respondent), Mr Akoto Ampaw, began his cross-examination of Mr Asiedu Nketia.

The video was shown in open court yesterday to enable Mr Akoto Ampaw to cross-examine the witness in order to establish his credibility.

At yesterday’s sitting, two short videos were shown which portrayed various NDC leaders allegedly proclaiming victory for the party in the 2020 elections.

The cross-examination of Mr Asiedu Nketia had begun last Friday.

Mr Akoto Ampaw, last Friday, had made an oral application to the court to grant him leave for the video to be shown in order for him to establish Mr Asiedu Nketia’s status as a credible witness, among other things.

The court subsequently ruled that since the attachment that contained the video had not been admitted in evidence yet, the video would be shown to ascertain its admissibility on the grounds of relevance.

Mr Asiedu Nketia admitted, under cross-examination, that he had seen the video.

Mr Akoto Ampaw then made an oral application to have the video shown in open court.

Mr Tsikata objected to the prayer by Mr Akoto Ampaw to have the video shown, on grounds that the said attachment containing the video could not be admitted in evidence through Mr Asiedu Nketia, since he was not the originator of the said video.

The video was also not part of the witness’ statement, counsel averred.

Two justices of the panel, Justice Samuel K. Marful-Sau and Justice Gertrude Torkornoo, suggested that although the witness had seen the video, members of the panel had not, for which reason it would be difficult for the court to make a determination on its relevance.

“This is because the witness has identified the evidence we seek to tender through him. He has also admitted that he was at the said press conference, and that the video covers statements made by the petitioner, himself and other members of the petitioner’s party,” he said.

The video was subsequently shown in open court after the Chief Justice, Justice Kwasi Anin Yeboah, had told the court that showing the video would enable Mr Asiedu Nketia to identify it.

Showing the video paved the way for Mr Akoto Ampaw to begin his cross-examination based on the content of the video.

He suggested that the witness had claimed that Mr Mahama had won the 2020 presidential election, not his opponent, Nana Akufo-Addo.

But Mr Nketia rejected that suggestion and said those were not his words.

However, Mr Akoto Ampaw insisted that the words Mr Asiedu Nketia used during the press conferences suggested that the petitioner had won the presidential election.

Mr Asiedu Nketia reiterated the claim that he never said the petitioner had won the election.

The over five-hour cross-examination, which featured addition and subtraction of figures that included presidential votes declared by the EC and the predominant use of a calculator, came to an end with a re-examination of Mr Asiedu Nketia by Mr Tsikata and further questions from the Bench.

Mr Asiedu Nketia replied that he did not know, since the EC kept on changing the figures.

Justice Anin Yeboah then asked the witness what he (Asiedu Nketia) had collated from the 275 constituencies for the presidential election.

Mr Asiedu Nketia replied that he had not brought those figures before the court.

Below are excerpts of the dialogue between Justice Apau and the witness.

Justice Apau (JA): "Ok. Then, from your own calculations, what were the valid votes cast in favour of the petitioner?"

Asiedu Nketia (AN): "My Lord, when we discovered these discrepancies, it was difficult to even get figures..."

JA: So if you don't know, you just answer.

JA: Ok, then the last one: what figures, from your own calculations, did the second respondent get as the total valid votes cast in his favour?

AN: My Lord, I don't have those figures here.

JA: Thank you; that is all.X

Dr Michael Kpessa-Whyte, who is the second witness for the petitioner and representative of former President Mahama in the EC’s strong room during the 2020 elections, will today mount the witness box to be cross-examined.

He will take his oath and his witness statement will be adopted by the court as his evidence-in-chief.

Lawyers for the two respondents will then begin their cross-examination.