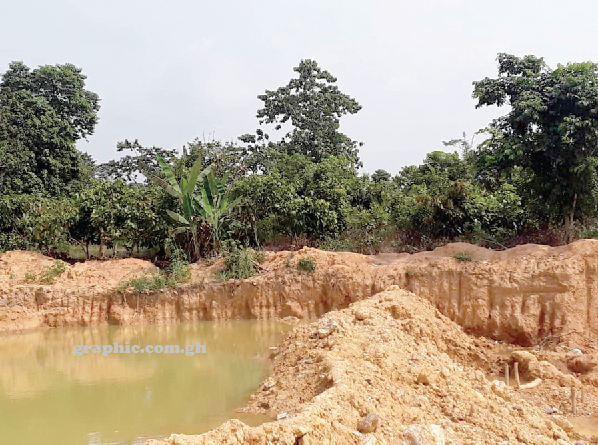 Part of the plantation that has been destroyed through illegal mining activities
30.5k Shares

A One District, One Factory (1D1F) project in the Obuasi Municipality, LEAPAB, which is into oil palm processing, is facing imminent collapse following the invasion of its oil palm plantation by alleged illegal miners.

Part of the 1,000-acre land that was leased by the Adanse Traditional Council to the company to grow oil palm to feed the factory has been invaded by illegal miners who have already destroyed large portions of the plantation.

The management of the company has expressed fears over the current development, saying it would derail the company’s plans and affect its ability to pay back credit it took to establish the processing plant and the farms.

The company has, under the circumstances, appealed to the President, Nana Addo Dankwa Akufo-Addo, to intervene and stop the activities of the illegal miners and also get them to reclaim portions of the farmland they have destroyed to enable the company to continue with its work.

LEAPAB started operations in 2018 with a GH¢20 million credit facility from the Ghana Exim Bank.

The Odikro of Adaase where a large portion of the 1000-acre land is located, Nana Kwadwo Asamoah, has condemned the activities of the illegal miners whom, he said, had polluted all the water bodies in the community.

He said the situation had been worsened by the introduction of community mining as one was unable to tell who was doing what and where.

Nana Asamoah has pointed accusing fingers at the Obuasi Municipal Chief Executive, Mr Elijah Adansi Bonah, as the one who was leading the small-scale miners to destroy the land.

According to the company, after invading the land for gold, the illegal miners also failed to reclaim the parcels of land, thereby denying the company use of them for farming purposes.

In an interview with the Daily Graphic, the Foreman of LEAPAB, Mr Kwame Boadi, also affectionately called Agya Boadi, pointed accusing fingers at some influential persons and opinion leaders in the municipality, describing them as the brains behind the illegal activities of the small-scale miners.

According to him, the two groups of people had permitted the illegal miners to prospect for gold on the plantation without authorisation from the relevant regulatory agencies.

According to him, in the run-up to last year’s elections, the company learnt that the assembly had earmarked part of their land concession for the community.

He said when Mr Bonah was informed that the land was already leased to LEAPAB for the cultivation of oil palm under 1D1F, he asked that “we allow the community miners to mine there and reclaim the land later for the plantation.”

Mr Boadi’s assertion was confirmed by the CEO of the company, Mr Ohene Adu Aboagye, who said he had agreed with the MCE “because he said they were going to mine on the land for only three months and reclaim it afterwards.”

However, he said, after mining the land they left without reclaiming it and were even trying to enter other parts. Now you can't plant anything on the mined land.”

When the MCE was contacted, he denied any involvement in the illegal mining of the land in question. He claimed all the assertions were machinations to tarnish his image.

According to him, the portion of land the company was claiming had been leased to it “is still part of AngloGold Ashanti’s concession and has not been released to the community.”

He said when the government launched the community mining scheme at Bekwai last year, “we thought that part of the area being talked about will be given out for community mining.”

“However, checks revealed that AngloGold Ashanti had not released the land to anyone and that those mining on it have been asked to relocate to a site allocated for community mining which was just on the other side of the road.”

Mr Bonah said the assembly had had to erect a signpost at the site to indicate that the area was reserved for community mining.

“We are in the process of getting nominations for district chief executive positions and I believe these are all machinations to undermine me,” he said.