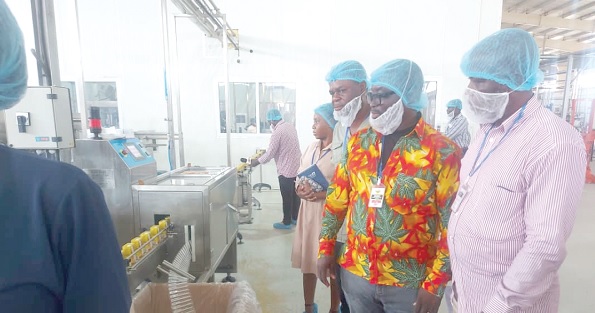 ONE of the successful initiatives of the government, One District, One Factory (1D,1F), has begun moves to export its products to the US, UK and the Dubai markets.

This is in respect of a new opportunity the company has found in those markets.

The Director of Operations, Ekumfi Fruits and Juices Limited, Frederick Kobbyna Acquaah, who made this known to journalists, said the move formed part of the expansion strategy of the company and the demand for pure unadulterated pineapple juice in those markets.

The Ekumfi factory was established in 2019 as part of the government's 1D,1F initiative in the Central Region to create jobs for the people, particulary the teeming youth.

"We have done all the preparatory works and are now working on our export documents and by the middle of the year, we will begin exporting to these markets, " he stated.

Mr Acquaah, who took journalists round the pineapple farms of Ekumfi Fruits and Juices Limited on a familiarisation tour to learn about the company’s operations, including production processes, said the opportunity to enter those markets would promote Ghana on the international market.

He said the company had more than 3,000 acres of pineapple under cultivation.

The farms, which are the company's own pineapple property, are located at Obri in the Gomoa West, Ekumfi Sardo near Otuam and Ekumfi Edumafa.

The Director of Operations said the farms were being expanded and the intention was to increase them to 6,000 acres and subsequently to 12,000 acres to meet the increasing demand for pineapples for the factory and sustainability of the company.

"The new market we have found in the US, UK and Dubai beyond our supply in the local market, have also necessitated the need to increase our farms," Mr Acquaah stated.

He explained that the company had not shut down its production, saying the company produced based on demand to maximise economies of scale.

"Whatever we produced has already been sold awaiting the next consignment," Mr Acquaah said.

He said the factory, established at a cost of $20 million, had the capacity to process 10 tonnes of pineapple per hour which translated to four acres of farm of pineapple fruits.

The director of operations said the company ran two shifts and the expansion plans would help to increase the shift to three.

On what motivated the establishment of the multi-million dollar factory, Mr Acquaah maintained that his dream and that of his partners, who were indigenes of the Central Region and products of the University of Cape Coast, for the past 25 years, had thought of a business to create employment for the youth and improve the socio-economic conditions of the region.

He said the establishment of the factory had helped to create jobs and improve the economy of the area in which the factory was established.

As part of the programme, Mr Acquaah took the media practitioners round the $10 million Central Citrus Processing Limited at Abura Asebu at the Abura Aseibua Kwamankese District.

Commenting further, Mr Acquaah said the Central Citrus Processing factory was what he was "mentoring."

Besides, he said, the factory would process citrus oil from orange peels for export, while Ekumfi Fruits and Juices would use the pulp for citrus juice.

He said the factory was located in a citrus production enclave and would help address the post-harvest losses of the fruits produced in the area and boost the economies of the town around the factory.