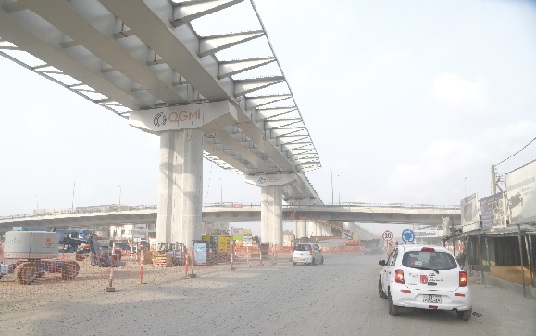 • The second flyover currently under construction at the Obetsebi Lamptey Interchange
30.5k Shares

Work on the Obetsebi Lamptey Interchange will not meet the March 2023 completion timeline in the wake of constraints that have compelled construction engineers to ask for an extension.

The Resident Engineer of the FAS Consult Limited, Owusu Sekyere Antwi, told the Daily Graphic that the workforce at the construction site had reduced due to some financial constraints, which could affect the March 2023 completion date.

“Work slowed down a bit from last Friday; the workforce was reduced due to the economic crises.

As a result, the contractor has asked for an extension of time to complete the work,” he said.

Mr Antwi noted that what was left to be done was the concrete work on the second flyover and the completion of the drains and auxiliary roads around the interchange.

The first flyover of the interchange has currently been closed to traffic, but motorists are able to use the lower level.

Currently, work completed is estimated at 80 per cent, as work has begun on the second flyover of the second phase of the project.

The second flyover lies directly on top of the first, linking motorists from the Abossey Okai portion of the Ring Road West to the Awudome portion.

The steel beams meant for the superstructure of the second flyover bridge have been installed.

Welding works have also begun and are expected to be completed in 23 days, Mr Antwi, has explained.

At the site yesterday, construction works were focused mainly on the welding of the steam beams and the merging of a U-drain to an already constructed one.

The substructure, columns, abatement and piers for the main bridge had all been completed.

The construction of the second phase of the interchange started in February 2021.

The first phase, valued at $35 million, was completed in November last year, five months ahead of schedule.